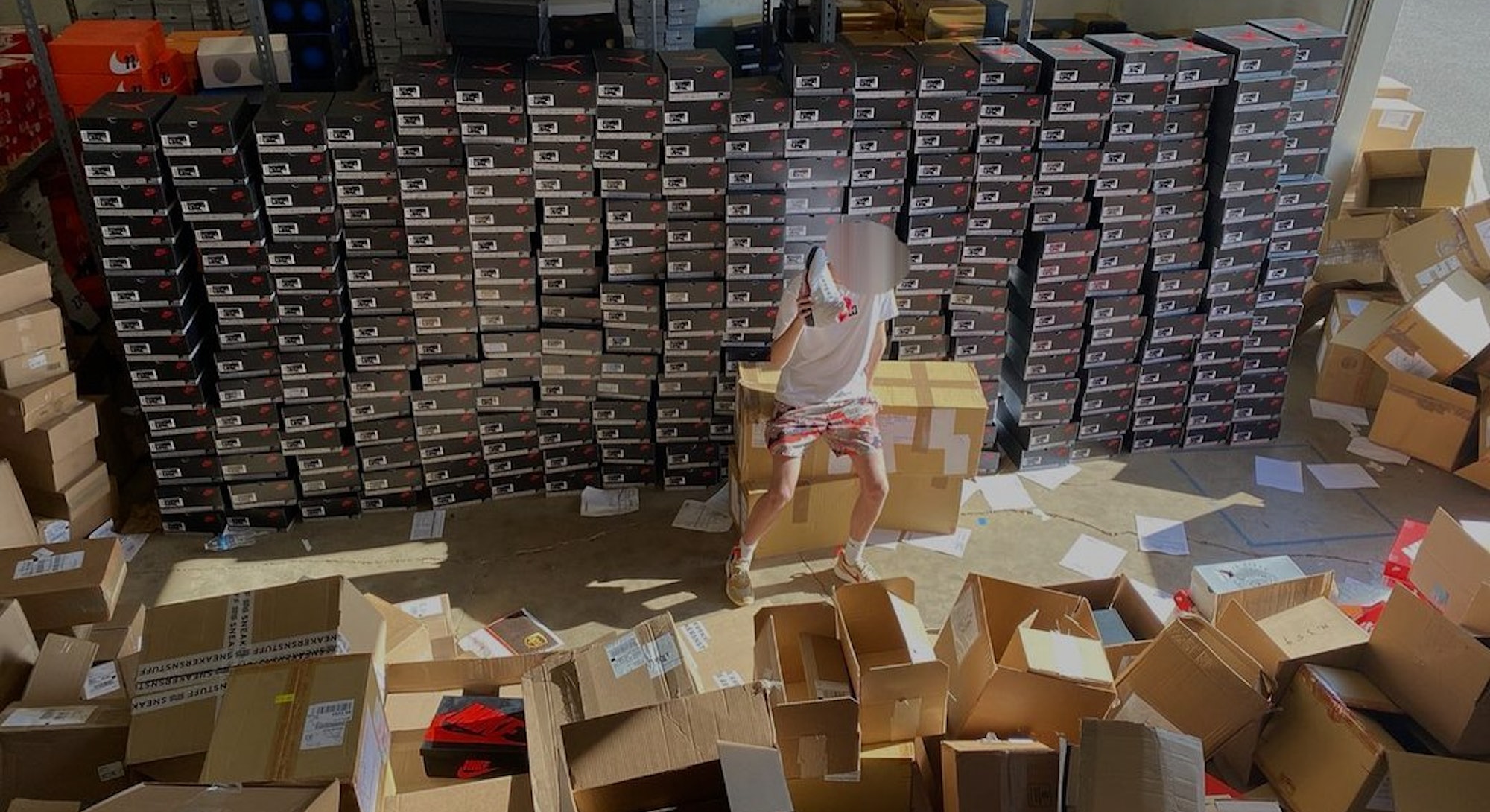 Clout chasing can be a dangerous game. 19-year-old Joe Hebert had a good thing going for himself with West Coast Streetwear, a lucrative sneaker reselling business that reportedly brought in as much as $600,000 a month.

The only problem — besides being denigrated by the sneaker community as a culture vulture — is that his mom is Ann Hebert, vice president and general manager for Nike North America.

While being the focus of a Bloomberg Businessweek on the boom of the sneaker reselling industry, Joe accidentally tipped off the reporter to his family connection as he provided details of his operation. One of the phone calls Hebert placed to the reporter identified the number as belonging to his mother, Ann, and he'd later confess the family ties without realization that you can't designate something as off the record post hoc.

Hebert also shared a credit card statement with Bloomberg that showed his mom was the account holder. And although Nike says Ann did disclose her son's business in 2018, there's an undoubted foul link here that should've raised a wave of red flags for the brand. Because if this was happening on Wall Street, it would be the equivalent of insider trading: How can the person responsible for your direct-to-consumer strategy, which includes the embattled Nike SNKRS app, also be benefiting from your product selling at a premium on the secondary market?

Still, Hebert insisted there was nothing untoward about profiting off a market in large part created by Nike and that he and his mom's respective careers were, in essence, church and state. And Nike seemed to agree that Ann had done nothing wrong, telling Bloomberg through a spokesperson, "There was no violation of company policy, privileged information or conflicts of interest, nor is there any commercial affiliation between WCS LLC and Nike, including the direct buying or selling of Nike products."

Four days later, Ann Hebert resigned from her position, effective immediately, after more than 25 years of working for Nike. The reporting on her sneaker-hawking son had created a scandal among sneakerheads who found it hard to believe nothing unsavory was going on.

If this was happening on Wall Street, it would be the equivalent of insider trading.

It's already frustrating enough when you can't buy a sneaker because some high-tech reseller has gobbled up dozens of pairs to sell to people like you, losers of this lottery of scarcity. But when the dork posing with a crate's worth of boxes is the son of a Nike VP, that feeling escalates to rage. What's the point in participating in a game that's rigged from the start? What fun is there to be had in a culture that's gone mainstream and has become overwhelmed with outsiders who treat sneakers as mere commodities? And why should we believe a word Nike says when we just saw nepotism and greed make it impossible to purchase one of the latest high-profile Air Jordan releases?

Marcus Jordan, son of Michael, held the undisputed post of most-hated person in sneakers for less than a month because of his boutique's Air Jordan 1 collaboration. Trophy Room's "Freeze Out" Air Jordan 1 created a rich narrative around the 1985 NBA All-Star Game, during which a rookie Michael was snubbed by his veteran teammates from the Eastern Conference. The glittery, blue-soled make-over of the shoe's "Chicago" color scheme would be an assured hit for sneakerheads, if only purchasing it wasn't even more of a fraught prospect than usual.

Before the "Freeze Out" 1 even released, numerous resellers were seen posing with disgustingly large stashes of the sneakers — suggesting that Marcus had privately sold large quantities of the shoe to friends in a practice known as "backdooring." The case against him would only be bolstered when it came time for the release, which was done through an email raffle that would easily help cover his tracks.

The Gmail account used for the raffle quickly saw its inbox filled to capacity not once, but twice because of the predictably massive volume of submissions. Most people who wanted to purchase the shoe received an automated response to confirm the sad truth: they never stood a chance. @SoleLink, a Twitter account with more than 565,000 followers, put out a call to see if anyone had been able to purchase Trophy Room's Air Jordan 1. Not one person responded.

To believe that Joe Hebert wasn't given an unfair advantage requires ignoring what you see with your own eyes and doubting there's more beneath the surface. The WCS LLC corporate credit card he used to purchase vast quantities of individual sneaker releases is registered in his mother's name. The LLC itself was initially filed by his father in 2018, when Hebert would have been a minor, before being transferred into his name.

At the very least, he would have had access to the famed Nike Employee Store because of his mother's position. There, employees and their friends and family are allowed to purchase products at a discount, including, the less venerated sneakers Hebert referred to as "garbage" in a YouTube video.

Furthermore, as if he wasn't tone-deaf enough already, Joe Hebert told Businessweek during one of his interviews that, “If you know the right people here [in Portland], this is the city to sell shoes,” adding that they “can give you access to stuff that, like, a normal person would not have access to.” Well, as it turns out, the "right people" feeding Joe Hebert special information could've easily been an executive at Nike — one who happens to be his mom.

While showing off his new warehouse capable of storing the more than 5,000 sneakers he has at a time, Hebert seemed to snitch on himself once again by admitting that he could still profit off of less-hyped shoes as long as he could find them "at the right price." And where better to scrape from the bottom of the barrel than in the very place where Nike's leftovers are sold to employees at a discount that can go well beyond 50 percent?

“When I worked there everyone got briefings about how anyone tied to reselling even by family would face termination.”

Hebert says he got Nike Shox, specifically, for just $20 a pair. And if you know of anywhere else besides the Nike Employee Store where such a purchase is possible, you've got one of the best-kept secrets in a field where so many eyes mean they no longer exist. Crucially, the Shox were stored in an area separate from the designated racks for sneakers found at "the back wall of an outlet."

Reddit, along with another anonymous forum called TheLayoff, has been alight with former Nike employees who've emphasized the punishment they'd have faced had they been connected to reselling in any way. "When I worked there everyone got briefings about how anyone tied to reselling even by family would face termination," a Redditor with the username MitchRhymes said. "I guess that was just us retail peons, not the children of executives."

TheLayoff forum dedicated to the news of Hebert and his mother contains multiple stories of people being fired for apparent connections to reselling and cries of hypocrisy for it going down unpunished at the executive level. One commenter makes it even more clear that Hebert had to have had access to the Nike Employee Store and said, "[He] admits to buying Vapormaxes [sic] at DEEP discounts, entire inventory is from product that sits at the company store for weeks (big give away is those adapts [sic]."

If no foul play was going down, why did Ann Hebert resign from her post? And why has her reselling son taken care to blur his face on Instagram as far back as 2018? Nike has done little to assure consumers that the landscape isn't even more rigged than we already feared.

A company spokesperson would only tell Input, "Ann Hebert made the decision to resign from Nike," and didn't answer any of the follow-up questions we submitted. That includes questions about whether Ann Hebert's resignation was directly tied to the report that exposed her ties to a sneaker reselling business; whether Nike was still standing by its original statement that she had no conflict of interest; and, perhaps most importantly, what actions (if any) Nike is taking to ensure its employees and people with family ties to the brand (like Marcus Jordan) aren't profiting off the resell market?

Public accountability over the Trophy Room fiasco has also been missing. The public line then given to outlets including Complex and Highsnobiety was just as weak: "We remain committed to serving our consumers with authentic Jordan products through Nike.com, and our strong distribution network and channels in both online and at brick-and-mortar retail."

Finding this commitment is just as difficult as finding the sneakers you want at a reasonable price. Marcus Jordan is unlikely to face punishment, and Nike has little motivation to be more fair and transparent when its profits are assured. Neither of these scandals is going to stop consumers from rushing to buy the next high-profile release.

The Swoosh, and anyone protected by it, will continue to operate with impunity because of the esteem held by the symbol. If you're expecting a company to do the right thing for the sake of itself, you must believe sneakers operate outside of capitalism as we know it.

And to think, we wouldn't even know about this latest egregiousness if a 19-year-old had known to keep quiet and keep raking in the money. Now his mom's out of a job and he's public enemy number one among sneakerheads — until the next Marcus Jordan or Joe Hebert arises.