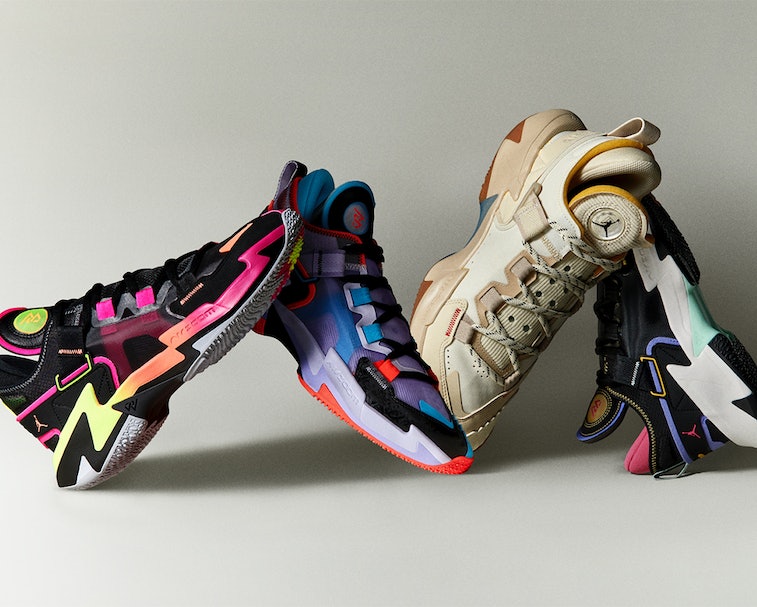 After Russell Westbrook debuted the sneaker during the Los Angeles Lakers’ Christmas Day game, Jordan Brand is officially pulling back the veil on the Why Not .5.

Westbrook’s fifth signature shoe continues to be an agent of chaos and, for better or worse, the most particular pair amongst the NBA’s star players. A new webbing system uses bands to lock down the midfoot, while a massive Zoom unit provides cushioning at midfoot. Multi-directional traction then makes up the outsole to maximize grip while cutting at a variety of angles.

Four color schemes will ring in the new model, three of which feature the unruly mix of colors we’ve come to expect from Westbrook’s line. A fourth, the one Westbrook wore on Christmas, comes in tonal cream with primary colored accents and is an official collaboration with his clothing brand, Honor the Gift.

First up, “Childhood” — The Why Not .5, which seems to shed the “Zer0.X” format used prior, will first go on sale March 1 in a “Childhood” color scheme inspired by Westbrook’s three children. Black is used alongside a bright red and blue, as well as a softer purple base. Black then forms the basis of both the "Raging Grace," which will release March 15, and the "Hype Music," which follows on April 5. The former mixes neons in pink, yellow and orange for a very ‘90s aesthetic, while the latter is a tad more muted with hits of seafoam green, purple, and pink.

The Honor the Gift collaboration, dubbed “Inner City,” has yet to receive a release date and will be accompanied by a full run of apparel that should pair well with the natural-toned sneaker. All other three sneakers will release in full sizing, with a pricing details yet to be confirmed either. Expect it to come in the middle range of Jordan’s price scale, though, as the Why Not Zer0.4 retailed for $130.

With how troubled Westbrook’s season has been with the Los Angeles Lakers, we wouldn’t be surprised if the Why Not .5 ends up being the last signature model. Both the leagues and brands such as Nike tend to move on quickly, so this very well could be the end of Westbrook’s sneaker run.