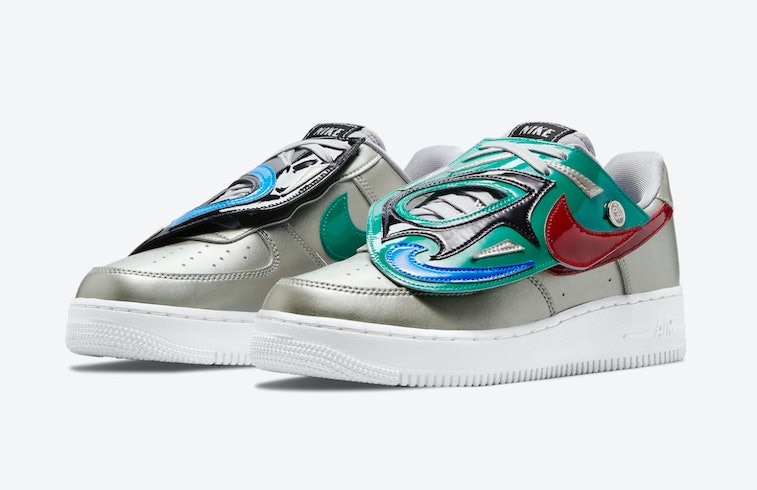 As one of Nike’s most popular models, the Air Force 1 serves as a perfect canvas for styles inspired by both its heritage and the world around it. With the sneaker nearing its 40th anniversary, the brand has revealed an AF1 design celebrating Mexico’s professional wrestling culture, aptly named “Lucha Libre.”

Joining an upcoming line of wrestling-inspired models — including a “Lucha Libre” Blazer Mid and Air Max 90 — the sneaker pays tribute to Mexico’s history by incorporating the country’s flag colors into its upper, most of which is covered by lace shrouds resembling the masks worn by luchador wrestlers.

Get a taste of the glory — Whether you’re familiar with the over-150 year history of Lucha Libre — or consider Nacho Libre a reputable source — this pair of Air Force 1 sneakers really brings Mexico’s wrestling culture to life. Predominantly clad in metallic silver leather, the shoe’s upper flaunts red and green Swooshes and Nike heel branding, nodding to the country’s flag.

Lace shrouds on both sneakers fully animate the sports reference with each resembling half of a Lucha Libre mask. Completed when each Air Force 1 is put side-by-side, the patent leather mask features blue, red, green, silver, and black panels, capturing the look of traditional luchador attire.

Metal buttons, which bear a graphic of a similar mask, sit near the top eyelet to secure the lace shroud into place. Green and red sock-liners read “¡LUCHA LIBRE!” while white laces and a white sole unit round out the design, taking care not to clash with the elaborate details atop the sneaker.

Want to go pro? — The masked Air Force 1 is set to join a Lucha Libre Blazer Mid and Air Max 90 later this year, though its makeup is arguably the best of the bunch. Covered in green suede and snakeskin panels, the Blazer Mid doesn’t declare its luchador inspiration as loudly, and the Air Max 90 only bears a small mask graphic on the heel of its black and white design. Lucha Libre is loud, rowdy, and fun — characterizations that apply solely to the thematic Air Force 1.

Nike has yet to announce a release date for its luchador-inspired offerings, though it’s likely the designs will release as a pack. A drop could be expected around September 16 — otherwise known as Mexico’s Independence Day and the second day of Hispanic Heritage Month — meaning your feet could be masked up in under a month. Consider this sneaker drop high stakes.