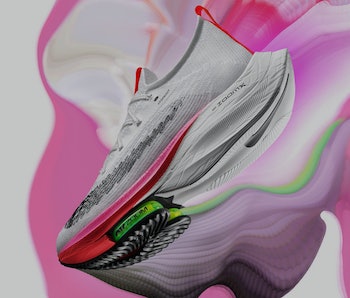 Nike’s theme for the Tokyo Summer Olympics is “Rawdacious.” That’s the name for a new pink, orange, and crimson color scheme that will appear across footwear for basketball, running, and soccer that’ll either be worn in competition or during the moments in between.

The bold color scheme was created to capture the emotions of sports being put on hold before making a “triumphant return.” The Summer Games were originally scheduled for last summer but were delayed until this year because of the pandemic. (Because of the commitment to branding, you’ll still see the Tokyo Olympics referred to as the “2020 Games” this year.)

“Color has the nuanced ability to invite both reaction and reflection at once,” Martha Moore, Nike VP of Central Color Product Design, said in a release. “You see a color, and you immediately react in a certain way. Color can also open the door to history, connections to other disciplines and to memory. In creating this year’s palette, we worked to consider color holistically to best represent a moment in time.”

What’s in store? — The “Rawdacious” lineup of sneakers is led by the Air Zoom Alphafly Next%, one of the innovative sneakers in Nike’s record breaking marathon series. It’s the shoe Eliud Kipchoge wore when he became the first person to run a sub-two-hour marathon, although the time wasn’t recognized as official.

Also included in the pack will be the Basketball GT Run, one of three all-new basketball sneakers Nike has introduced this year. The Air Zoom Pegasus 38 and Pegasus 38 will be for more casual running, while the Tiempo and SB Pollen could show up in competition for soccer and skateboarding, respectively.

Allow Nike to reintroduce itself — While the “Rawdacious” sneakers were created specifically because of the Olympic delay, Nike is also in the semi-awkward position of re-introducing some of the gear it had already announced last year. As a refresher, U.S. athletes on the medal stand will wear windbreakers and pants made entirely from recycled materials — as well as the FlyEase Glide, a hands-free sneaker with 50-percent construction from recycled materials.

The U.S. Women’s Basketball team will wear a special “Red Dynasty” uniform designed to celebrate the beginning of its run of six consecutive gold medals in 1996, an unprecedented run that could very well extend to seven this summer. The coolest uniforms of all, however, will go to the skate teams for the U.S., Brazil, and France, which have all been designed by Piet Parra and use 100-percent recycled polyester.

As has been rumored, Nike and Piet Parra will also release also release an SB Dunk Low for the occasion — which will certainly be the most hyped Olympic piece of all.