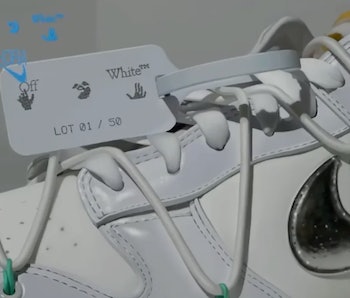 Off-White and Nike are beginning the rollout of their coveted “The 50” collaboration today, starting off with their 1/50 and 50/50 iterations of the Dunk Low sneaker. Considered the most desired shoes out of the 50 — thanks to their all-white and all-black bases — the sneakers can only be bought through raffles at Off-White locations.

All 48 Dunks in between the first and last of the collaboration feature the same white and grey color scheme as the base, with numerous different color combos accenting their tongues, zip-ties, Swoosh tab, and laces. Each is commemorated with its edition out of 50 on a label affixed to the midsole, adding even more exclusivity and hype to the commercialized shoes.

Starting with the end — Off-White references its all-white 1/50 and all-black 50/50 Dunk Lows in its release messaging: “Exploring the Off-White motto of ‘defining the grey area between black and white,’ Virgil Abloh designed a Dunk Low offering expanding the notion of permutability within one collaborative design,” the brand wrote on Instagram. We doubt many consumers are noting the meaning behind Abloh’s creations, though — to most, permutability speaks less to the different Dunk designs and more to the exchangeability of the shoes for profit.

As the only monochromatic iterations in the collection of 50, the 1/50 and 50/50 editions are specially marked with reflective silver Swooshes. The former features a faux-aged sole — a nod to vintage Dunk models — while the latter sports purple accents against its black base. Two sets of laces, one wide, wrap up the collaborative sneakers.

How to score your sneakers — According to Off-White, its first and last Nike Dunk Lows will be offered exclusively — how else — at the brand’s locations on August 2 via raffle. Consumers can join the draw online as well, with entries open until 6 p.m. ET and PT. One raffle will be run for each color and size.

Should you (most likely) miss out on the hyped sneakers, more chances to win Off-White’s Nike Dunk Lows are around the corner. Come August 9, select SNKRS users will be given exclusive access to the new Dunks, with invitations to purchase rolling out over the following days.

After a SNKRS drop of Off-White’s “Lemonade” Air Force 1 sneakers was exploited by resellers and collectors, Nike is trying its best to give priority access to the people who constantly show the brand love — particularly on its SNKRS app. To better your chances of gaining exclusive access to shoes on SNKRS, you’ll want to engage with the app’s content as much as possible.