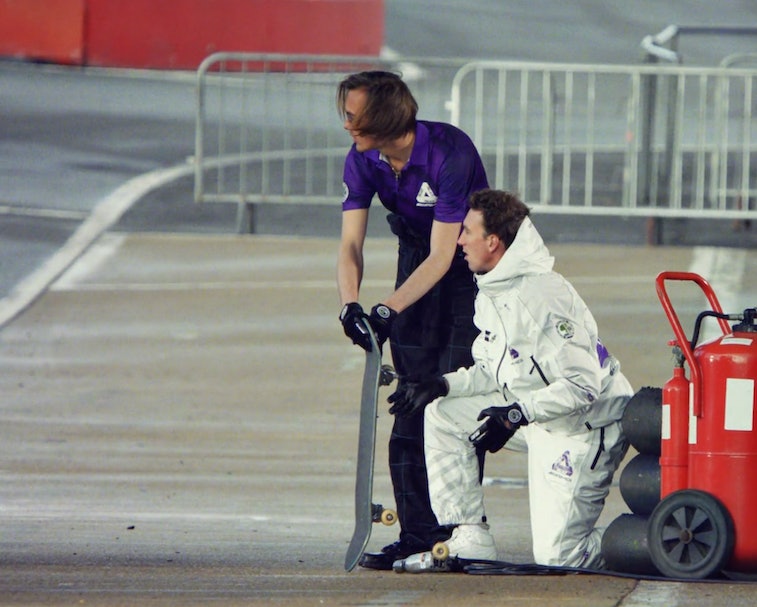 BMW has partnered with KITH, Porsche has tapped Aimé Leon Dore, and Mercedes-Benz enlisted Virgil Abloh to customize a G-Wagon last year. Whether or not this leads to millennials and zoomers buying German luxury vehicles remains to be seen — but it has resulted in some bangin’ car merch, Abloh’s Toyota Scion lookalike notwithstanding.

Palace, which has built an unprecedented presence in the sports world, will get the biggest nod yet with its partnership with Mercedes-AMG. The British skate brand has decked out an AMG GT3 that’ll race at this weekend’s Nürburgring’s 24 Hours, adding endurance racing to Palace’s takeover of soccer, tennis, golf, and cycling. And just like Palace’s previous appearances in the highest levels of sports, its latest collaboration will result in a whole lot of merch for the layman hypebeast.

The two brands have teamed up for a fully loaded capsule, consisting of nearly 20 distinct pieces made more voluminous by a range of color options. Everything you could wear besides footwear is covered, including a fit that will have you looking like you’re in a hypebeast pit crew.

Earn, or buy, your stripes — Gore-Tex jackets and pants, available in either black or white with purple branding that includes Nürburgring insignia, will make you feel like you can change a tire in a matter of seconds. Along with a beefy leather jacket that channels JH Designs’ iconic outerwear, the waterproof attire is the highlight of the lot — but good luck finding a loose nut in the collection.

The hood of Palace’s AMG GT3 features a roaring tiger, which informs the stripes that appear across the aforementioned goods, as well as crewneck sweatshirts, polos, beanies, and premium leather tote bags. Mercedes-AMG’s emblem has also been altered to include Palace’s name, while “AMG” has been added beneath the streetwear brand’s signature Tre-Foil logo.

Most absurd of all is a T-shirt bearing a tiger shot in the style of kitschy ‘80s portraits. And for those really looking to commit to the automotive cosplay, a pair of racing gloves stand out among the accessories that also include skateboard decks and wheels.

The green light comes Friday — Palace and Mercedes-AMG will release their collaborative capsule through the former’s website at 11 a.m. this Friday, June 24. You’ll also be able to see it in action the day before when the A.D.A.C Total 24hrs Race begins.