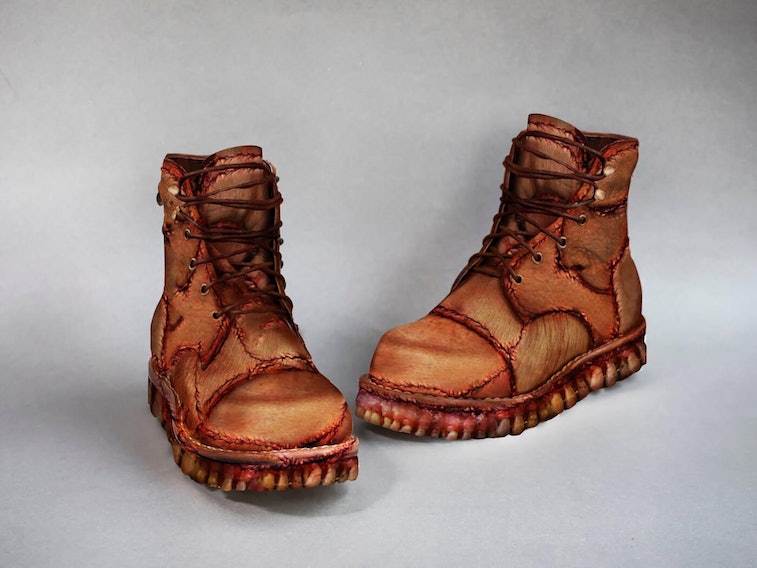 When an animal is in trouble, you call PETA. But what happens when PETA flips the script? The People for the Ethical Treatment of Animals just announced a satirical shop that uses human parts as the canvas for its digital apparel display.

Taking a jab at Urban Outfitters, the PETA store, aptly named Urban Outrage, is presenting items “made of the finest leather.” What the organization then goes on to mention is that the leather grotesquely sources human beings in a bloody blend of skin-, teeth-, and blood-covered jackets, shoes, and bags. Rest assured, the collection is fully digital and not up for sale, much to the chagrin of some Twitter users.

Ed Gein walked so Urban Outrage could run — The names and descriptions of the “slaughtered people” used to make the pieces can be found on the site. For example, Dwayne from the Dwayne Weekender Bag was “kicked in the head repeatedly until his face was unrecognizable.” The Sofie Dress memorializes Sofie, a girl who was “lured away from her home” by “cruel farmers” who “rubbed tobacco and chili pepper in her eyes.” Adrian “still had plenty of life left before he was rounded up and starved” for the making of the Adrian Belt. Other items, like a “dog lover’s” dog collar and a skirt made of “the best” of its namesake, join the compilation.

Along with the freaky product descriptions, Urban Outrage adds some reviews that give even more eerie realness to the campaign. One user complains of “too many bloodstains” while another says that while “one person vomited, the vast majority of reactions [however] have been positive.” The site also offers a sick, but fictional “Afterlife Collection” that allows grievers to transform their loved ones into handmade apparel pieces.

The style that demands a second look — The collection aims to give new meaning to “Who are you wearing?” PETA, known for some extreme campaigns, intends to raise awareness for animal cruelty, a mission that is still making its way through the fashion industry.

The entire campaign’s cannon is aimed at those who rely on animal consumption for their pieces without respecting the life of the animal -- albeit slightly sensationalized. PETA’s Executive VP Tracy Reiman told The New York Post that a cow “feels fear and pain in a slaughterhouse every bit as much as you or I would.”

Though PETA’s scare factor definitely shines through the scars and bloody parts of each item, the collection is satirical. I mean, would you have to rub lotion on the pieces to avoid ashiness? Why the exaggerated stitching and unmatching skins? Do you think PETA might’ve taken this one a bit far? If not, there’s probably an Etsy shop that can handle that whole... thing.