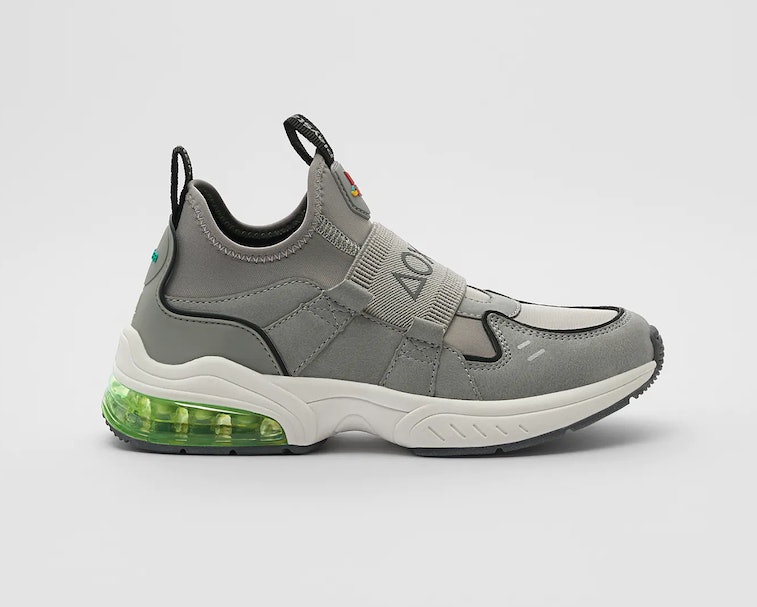 PlayStation has enjoyed a voluminous history of sneakers with Nike, dating back to the legendary PlayStation Air Force 1 in 2006. The shoe was given out to select Sony employees in the lead up to the PlayStation 3 launch. The AF1's upper was made of black patent leather with a colorful, gradient panel adorned by the PlayStation logo. Only 150 pairs were made, one of which was given to Kobe Bryant. And if you want to snag a pair today, you'll have to shell out thousands of dollars.

Paul George has since shown his love for PlayStation with several pairs of his signature Nike shoe, as did Paul Rodriguez back in 2008. So the question is this: why follow up all these Nikes with a Zara sneaker?

An unexpected collab — Zara's official PlayStation sneaker for children has released without fanfare and is a real head-scratcher. If you focus on the merits of its appearance, the sneaker ain't so bad. Its sock-like construction is trendy enough, and the all-grey treatment calls back to the original PlayStation console. The PlayStation graphics are well-placed, particularly the "Power" button on the heel, and the only questionable detail is the green air bubble that brings to mind Xbox.

A bad, bad company — I'm not petty enough to focus on Zara's lack of cool when it comes to an affordable children's sneaker. (You can find it here for $49.90.) That said, Zara's quality, or lack thereof, may ensure that the sneaker doesn't hold up for as long as it takes a child's foot to grow out of it. But the real issue is the company's ethics.

In addition to building a brand off of ripping off others, Zara has a horrific reputation for its labor practices. It's been sued for both slave and child labor while its owner, Amancio Ortega, was once the richest man in the world. In an investigation into its "sustainable" products, Public Eye honed in on a single hoodie priced at $29.50 and found that there was no way the people who made it could have earned livable wages. "Ultimately those who pay the highest price for Inditex’s [Zara's parent company] profit are the people who make the business possible in the first place—the factory workers," the report concluded.

Consumption under capitalism requires compartmentalizing the fact that someone has suffered for your goods. That's true for your PlayStation and true for your Nikes, the latter of which Deadheads upset by the Grateful Dead's collaborative sneaker pointed out just this week.

Zara is just particularly egregious, and I have no problem telling the company to go to hell and never come back.