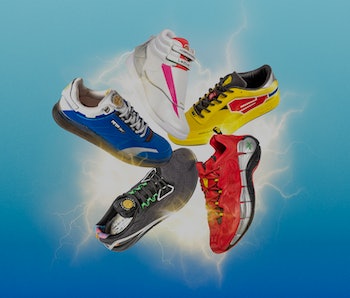 Whether you’re a ’90s baby or a Gen Zer, you’re probably familiar with Power Rangers: It’s one of the longest-running kids’ live-action series in television history. This year marks the show’s 28th year on air, and to celebrate, Hasbro has teamed up with Reebok to create Power Rangers-themed sneakers suitable for any fan of the series — even if you no longer wake up early on Saturday mornings to watch it.

Something for every Ranger — Channeling the Red Ranger’s athleticism and powerful personality, Reebok’s new Zig Kinetica II features a jagged toe box to represent the Tyrannosaurus Zord’s teeth with silver Zord accents along the midsole. Reebok’s Nano X1 model, on the other hand, takes on a sleek look to represent the Black Ranger’s agility and speed. A yellow heel tab also references the character’s signature ’90s fashion.

Paying homage to the Blue Ranger’s power from within, Reebok has modified its retro Club C Legacy sneaker with a translucent sole — showing an important aspect of the shoe too often shrouded by the outsole. A white collar and heel blocking further nod to the character by resembling the design of the Triceratops Zord’s crown.

Fans of the Pink Ranger can pick up a pair of Reebok’s Freestyle Hi, the first workout shoe made exclusively for women. Pink stripes down the center of the shoe make reference to her Pterodactyl Zord, while a green broken heart on the inside strap alludes to the Pink Ranger’s relationship with the Green Ranger.

Highlighting the versatility of the Yellow Ranger is the Club C model, with boasts Zord markings and a wing logo on the back of its tongue — a detail added as a tribute to late Yellow Ranger actress Thuy Trang. Wrapping up the collection is a Question Mid, which references the Megazord through a design featuring Zord eyes and V-printed eyelets that emulate Zord teeth.

It’s Morphin time — Each model comes with packaging as collectible as the shoes themselves, with a Power Coin and thematic shoebox included with every sneaker. Should adult fans collect all six sneakers, they can combine their shoeboxes to create a limited edition Megazord figure akin to the television show model.

As the most commemorative pair in the collection, the Megazord Question Mid will be available exclusively on Reebok’s website starting June 29. The rest of the Ranger models will drop the same day on the brand’s website and at additional retailers.