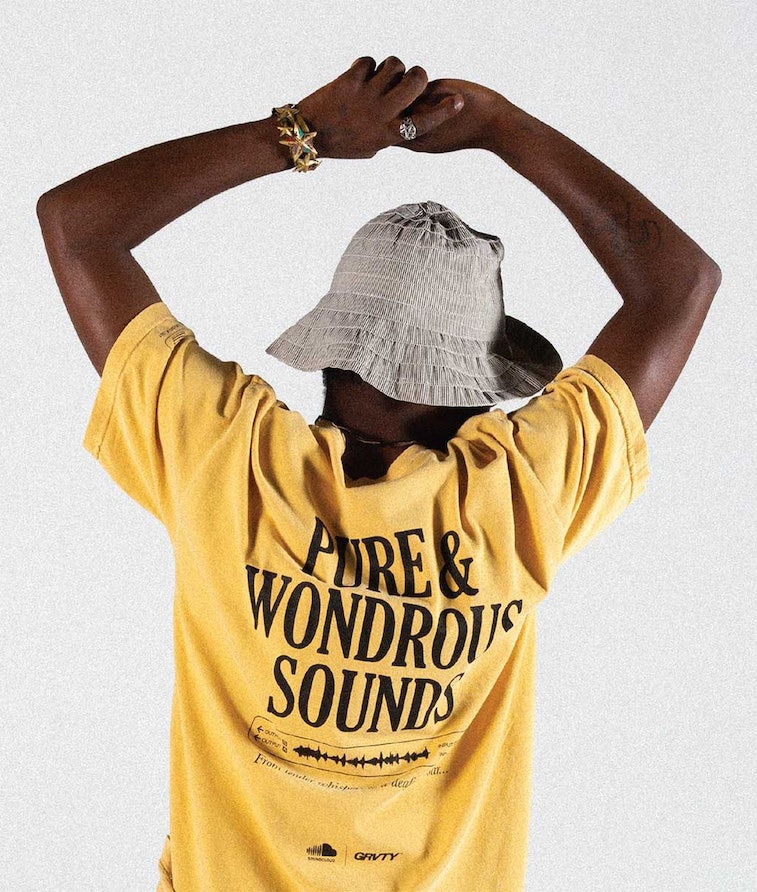 Music and fashion give people a way to escape the monotony of everyday life.

From zoning out while listening to a playlist to serving a look while outdoor dining, they provide mechanisms to feel, heal, and cope. Offering a portal to an inventive future is the D.C.-based independent broadcast company, GRVTY. Known for experimental videos, musically driven, and socially conscious apparel, the brand has teamed up with SoundCloud to launch the streaming giant’s debut fashion collection — one that's designed to support emerging artists and underground designers.

Of course, SoundCloud is largely responsible for jump-starting the careers of artists like Billie Eilish and Lil Uzi Vert, bona fide style mavericks in their own right, and that presents a tremendous business and cultural opportunity for the company. "Music and fashion are intrinsically intertwined," Leon Sherman, the global editorial director of SoundCloud told Input in an interview. "Some of the most influential, groundbreaking creators to launch and grow their careers on SoundCloud are fashion icons in today’s culture, we see an opportunity here to push boundaries that aren't being pushed."

In the same vein, GRVTY is all about discovering, championing, and amplifying the works of up-and-coming creators. GRVTY co-founders, Marshall Tan, and Orlando Urbina are the 29-year-olds responsible for the SoundCloud collection. They developed the streetwear-esque line while quarantined in Brooklyn, New York drawing on the copious amounts of music they consumed. "I kind of reflected on what music was doing to me and what I was turning to music for during these times of uncertainty, and the power of an everyday medium we don’t normally need to reflect," Tan said.

"The founders of GRVTY are organically part of the SoundCloud community," Sherman added. "They’re emerging creators at their core as designers and video directors. We wanted to invest in a creative project with GRVTY to spotlight them and their work as emerging creators and collaborate on work that would be meaningful to our community."

The collection is comprised of sweatshirts, T-shirts, and vinyl slipmats, designs include phrases like “There Will Be A New Day And A New Song, Play on,” “Exalted, Sonically,” “Endless Loop Harmonix,” “Futuristic Frequencies And Advanced Vibrations” and “Pure & Wondrous Sounds.” The phrasing very clearly juxtaposes the current chaotic state of the world. “Music is something we could tap into. It was a reflection of the power and uplifting nature of what music can do for you. A lot of the phrasing comes from that idea. Music can be experienced in a few different ways. It’s meant to uplift, to inspire, and to escape,” Tan continued.

“Music and fashion are intrinsically intertwined.”

Urbina started GRVTY in 2011 as a production house where at the time he worked on music videos, ads, and more. Fortunately, the brand evolved into so much more after Urbina and Tan met at the University of Maryland, where they both attended college. Here their creative epithets took flight. Pairing Tan’s marketing abilities with Urbina’s videography background made for a dynamic business partnership. “With GRVTY it's always been us trying to discover our place in the world. As two children minorities in America, we’re learning step by step. There are no mentors that we really look to so we're just doing what feels right,” Urbina said.

Eventually, they started working with the founders of the popular D.C. music festival, Trillectro, Modele “Modi” Oyewole, Quinn Coleman, and Marcel Marshall. With their growing work reputation, they garnered the attention of the Embassy of Japan, sending the college friends on a global mission. Between 2013 and 2014 they experimented with workwear for their productions that eventually turned into a clothing line. In 2016, they released their first piece, The Rainbreaker, and the brand has continued to expand.

Enter the H Street Dynasty, the now-defunct studio space on H Street NE, Washington, D.C. where they worked and threw parties from 2014 to 2018, landing their names amongst D.C.'s creative class. “In the same way that Fairfax is branded in L.A. We wanted to create something that you know even before getting to D.C. We wanted to take pride in our location,” Tan said. Although they now live in New York, the Nation’s Capital remains in sharp focus.

“There’s so much amazing talent from where we are from so whenever we get the opportunity, we carry the dynasty of H Street on our back,” Urbina said. That's why they work with creatives such as Nappy Nappa, a D.C. rapper who serves as the poster child of the “Pure & Wondrous Sounds” collection, as well as a collaborator on a number of other projects they’ve released.

“There’s so much amazing talent from where we are from.”

“He is the most honest version of D.C. you’ll ever get. We were like he has to be a part of this. He has to be in the ads,” Urbina added. Promotional materials for the line were shot in Pittsburgh, PA featuring Nappy Nappa in just about every shot. True to the brand’s collaborative nature, Tan and Urbina also worked with Tyrous Morris, who shot the behind the scenes photos and helped with the promo video for the collection.

"For the general term of independence, working with GRVTY and just their sheer creative work ethic has been inspiring to see," said Sherman. "And for independent artists, especially in this time and as a whole it's about being able to operate independently as much as possible and find creative ways to reach your fans and also forge paths to sustainability, which is now more important than ever in the short to medium term with the pandemic wiping a lot of revenue streams out,."

After conducting audience research, SoundCloud found that the intersection of music and fashion is paramount. While they could have chosen a more “notable brand” to collaborate with, the belief in tapping into new and emerging designers aligned with the platform’s mission, to amplify the new and next.

In April, SoundCloud announced a $15 million plan to support artists during the shutdown, as well as initiatives to bolster their careers long-term. The plan includes initiatives like giving creators the option of adding a special button to their profiles to facilitate financial support from fans via Kickstarter, Patreon, Bandcamp, Paypal, and more. Additionally, the company is committing $10 million to help fuel the careers of independent artists with its new artist services offering, Repost Select.

SoundCloud's partnership with GRVTY is an expansion of this mission, to help creative communities find sustainable means of monetization – and it plans to continue to roll out more collaborations with other designers in the coming months, turning the platform into a creative ecosystem for more than streaming artists. After the $26 billion live events industry took a major blow and music venues all over the country shuttered in 2020, due to the pandemic, SoundCloud, too, has had to adapt to the times.

Fashion has always played a key role in the music industry, allowing artists a means of monetization well beyond a show or record deal. SoundCloud's move into the fashion industry now proves a hopeful means of sustainably for emerging designers, especially as the creative economy continues to evolve.