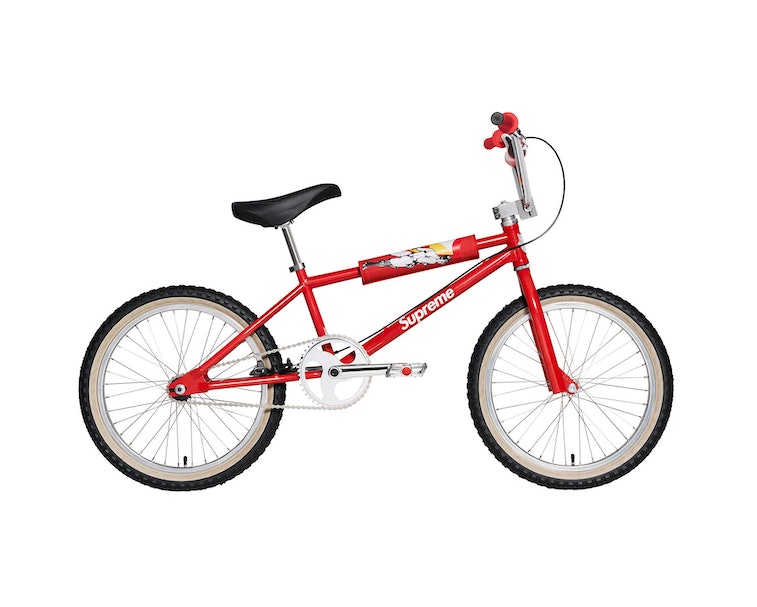 Supreme's Santa Cruz Chameleon mountain bike was one of its most hyped releases of 2018. Rumored to have only sold 200 units worldwide, the bicycle now fetches a premium on the resale market. Listings are few and far between, but two are available now for $5,900 and $7,439 — a major spike from the already steep retail price of $2,698.

Now, it's time to prepare to see the same thing happen all over again, as Supreme has announced another bright red, logo-adorned bicycle to go on sale this week. This time around, it's a BMX bike. More specifically, the S&M Dirtbike from 1995. But all that really matters is that it has a Supreme logo on it, and scarcity will ensure only a handful of people will actually get to ride it.

Here are the details anyway — Supreme's latest bicycle is a detailed recreation of S&M's 25-year-old model, with original S&M Slam Bars and dual poly grips in the streetwear brand's signature shade of red. The frame is made of TIG welded 4130 CrMo alloy steel, and the wheels are measured at 20 inches. Additional branding comes on an engraved Redneck stem, as well as custom pads for the frame and handlebar.

It's not Supreme's first BMX bike — To find another you have to dig way back into the archives, in the '90s when Supreme was nowhere near the monster it is today. The then-young brand collaborated with Brooklyn Machine Works on an ultra-rare model that resurfaced two years ago for a staggering $47,000. It was a simpler bike, but those were also simpler times.

Dropping this Thursday — While Supreme's Santa Cruz bike was an in-store release only, the brand's physical locations are shutdown indefinitely because of the COVID-19 pandemic. That means the S&M bike will be released online, as always at 11 a.m. EST, for a cool $1,898.

Even though Supreme is working with a discontinued S&M model, its 1995 BMX bike is still going to cost a cool $1,898, the brand revealed on Instagram. That may not be as expensive as the more sophisticated Santa Cruz, but that's not cheap by any means.

You can also bet that units will be extremely limited, which is always the case when Supreme works with larger items like this. If you don't have a bot, you'll be pretty much hopeless — and those using the dark arts still won't stand much of a chance. Welcome to Supreme at its most difficult.