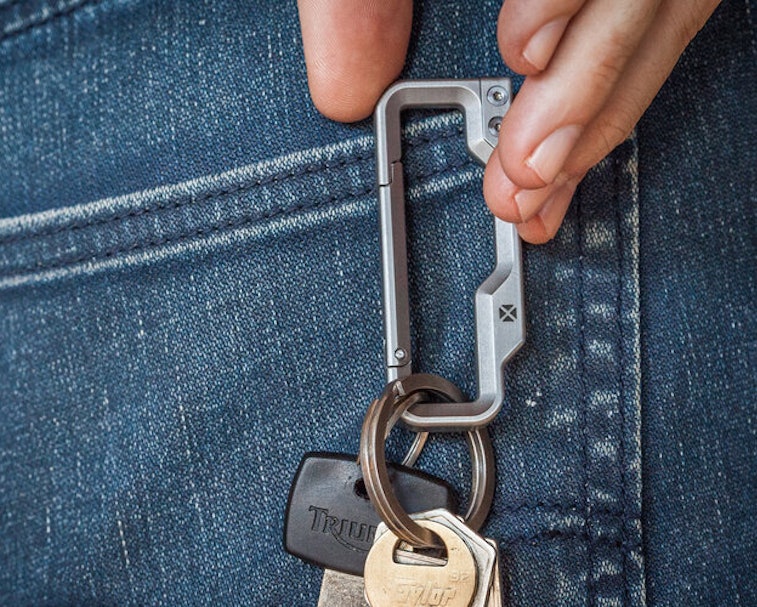 I'm one of those guys that walks around with a big, jingly bunch of keys strapped to a belt loop with a chunky climbing carabiner. This is painful to admit, but in my early 20s someone asked me "are you, like, a janitor?" And first I'll have you know that we should respect the custodial staff among us, and second; no, I am not, thank you very much.

But that incident did elicit some self reflection. Am I carrying too many keys? Is my carabiner too big, too unwieldy in its girth? Sure, it could suspend an entire human man from a series of chunky ropes, but is that what I need in my life right now? I would argue: probably not.

So in my quest for an ever improving collection of everyday carry (EDC) items, I keep an eye out for goodies like the upcoming HyperLink. The HyperLink is a carabiner made specifically for carrying your keys, memberships cards, or whatever else you need to lash to your hip. It's made out of a solid hunk of titanium and has an attractively rectangular design with smooth, tapered edges that are punctuated by a pair of torx screws that hold the two sides together.

Now, as attractive as the HyperLink is, it costs a hefty $74, and that's with a 20% pre-release discount. That's pretty spicy for some hip candy. But hey, if you've got the cash to burn, I have no doubt that this carabiner will up your EDC game and would go perfectly with some trendy titanium pens and SuperGroupies' Death Note watch.