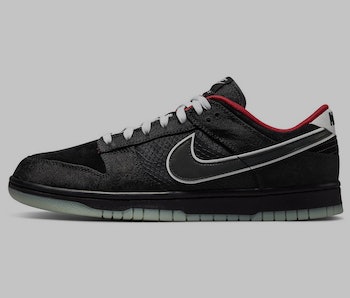 Following a bountiful collaboration this summer, Nike is set to continue its partnership with the League of Legends Pro League by giving it its own Dunk Low. Even if you’re not a fan of the game, you’re likely to be tempted by the Air Yeezy-esque color scheme.

The LPL, China’s top league for League of Legends, will get a black Dunk with a variety of textures along with reflective and glow-in-the-dark accents. Thanks to a green-tinged outsole that, despite its appearance, does not actually glow in the dark, and a red sock liner peeking out, the sneaker looks a lot like the Air Yeezy 2 in its “Solar Red” variant.

Making the resemblance to the iconic sneaker even more uncanny is a snakeskin leather used for the Dunk’s quarter. The texture comes in contrast with traditional Chinese iconography used for the majority of the upper, while the vamp and foxing come in suede. And while LPL fans will surely be ecstatic over a Dunk Low to call their own, make no mistake about it: Yeezy fans should be clamoring as well.

Lights off — The white trim surrounding the Swoosh serves as the lone glow-in-the-dark accent, but when hit with direct light, the Swoosh itself transforms via reflective material. Regardless of light conditions, this is a sneaker pulling out all the stops in order to stand out.

LPL branding is kept to a minimum, as the league’s logo appears beneath the standard Nike logo panel on the tongue as well as on the insole. Nothing about the sneaker screams “gaming” — which is actually quite refreshing as sneaker brands and even the luxury sector are racing to capitalize on the culture, too often with tacky designs.

Nike has yet to confirm a release date for its LPL Dunk Low, but it’s expected to come sometime during the holiday season. Given the shoe’s connection to China, we wouldn’t be surprised if it’s saved for Nike’s annual Chinese New Year assortment. Should that be the case, it may already be a shoo-in for best sneaker of the lot.