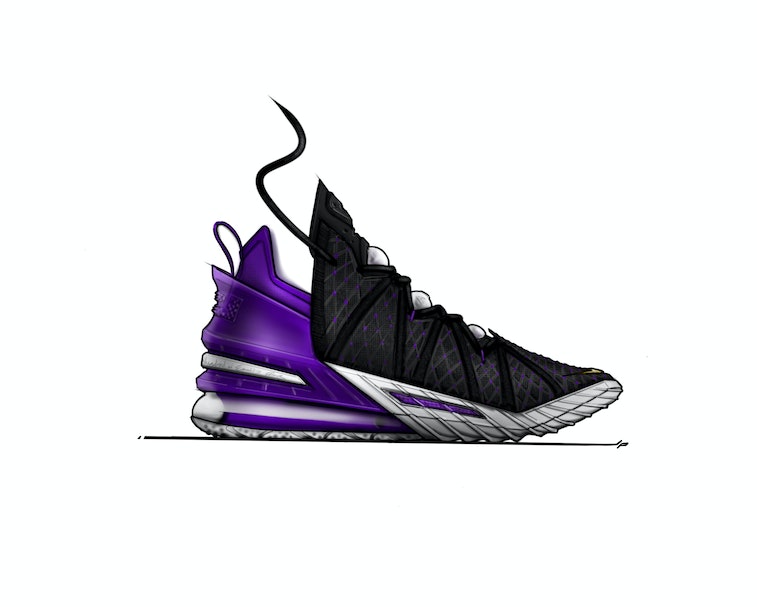 Nike and LeBron James have begun teasing the LeBron 18 from the NBA bubble in Orlando. His first signature sneaker dropped when he was just 18 years old, and James' latest marks him spending half his life signed with Nike. This is represented in the split design, which also has the technical purpose of dividing speed and power.

An Air Max unit in the heel is augmented by a full-length Zoom Air Bag, the latter of which replaces foam in the heel for the first time in a Nike basketball sneaker. This split is also done to foster speed up front with strength in the back.

For now, Nike has just released sketches of the LeBron 18 — but James has already been spotted wearing the sneaker in Orlando.

New knit, more Air — The bubble effect from the knit upper in the last three LeBron sneakers is replaced by a more flexible Battleknit. Its rib cage design returns elements from the LeBron 15 and LeBron 18 for a combination that's lightweight and strong enough to endure the force from James.

In addition to the new Air construction in the midsole, the tongue sees unpressurized Max Air units in the tongue instead of foam. This was done as an experiment in comfort, while also allowing the color of the wearer's socks to show through the pockets.

The last major breakthrough comes in the traction, which has been done through a computer-based design from the Nike Sport Research Lab. Four quadrants at the forefront feature thin siping, which then becomes broader as it moves toward the heel for softer traction. By targeting levels of traction to each area of the foot, the outsole encourages more efficient movement.

When will we see more? — James was still wearing the LeBron 17 during the Lakers' first scrimmage Thursday night in Orlando, but you can bet we'll see him in the LeBron 18 at some point when the season properly resumes. The sneaker will begin releasing in September, during which the playoffs will be well underway and the Lakers are primed for a deep run.