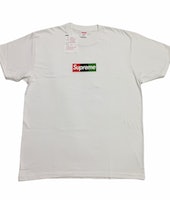 That's how much this super rare piece will cost you.

When shown as part of his exhibition at the Museum of Contemporary Art Chicago, Virgil Abloh's Supreme box logo T-shirt instantly became a hypebeast's dream. Had it been released, it would have been one of the most anticipated releases in all of streetwear simply because of the two names involved. Instead, it lived only as an artifact — put up for display and photographed while being worn by Chief Keef.

Now, we'll see just how much cash the hype is worth. A sample of the T-shirt has made its way to Duke's Archive, a webstore that specializes in rare streetwear, where it's been listed for €10,000 (~$11,500). If sold, that would make it among the most expensive box logo T-shirts ever sold.

Behind the box logo — Supreme's box logo was altered to display the colors of the Pan-African Flag, a symbol for the African Diaspora and Black freedom. Ideally, whoever ends up buying the T-shirt ends up appreciating that fact — and not just the rarity and stature of the names involved.

A production tag affixed to the tee confirms it would have been released as part of Supreme's SS20 collection, which just recently wrapped up. The size-XL T-shirt was part of the second print test, after which the collaboration was scrapped entirely. As of now, it's the only sample to end up on the resale market.

Rare territory — While box logo tees that have been properly released can fetch a hefty sum, the only real comparison for Abloh's are other unreleased samples that have found their way to the market. An unreleased Nate Lowman collaboration for the Shibuya store opening in 2007 is amongst the rarest and is also listed for €13,500 (~$15,500) on Duke's Archive. It differs from the Lowman T-shirt that was released by featuring a pink box logo with five bullet holes instead of just two.

Unfortunately, the most expensive box logo ever sold involves Donald Trump. The sample was produced by artist Andrei Molodkin in 2003 and features a ballpoint drawing of the man who would one day become president / our national nightmare. After going unsold for just $1,500 earlier in 2016, the T-shirt fetched $23,000 on eBay shortly after the election.

If only Abloh's tee was up for auction and could have a shot at dethroning the Trump illustration. Alas, it has yet to be sold and can still be yours if you've got five figures to blow.