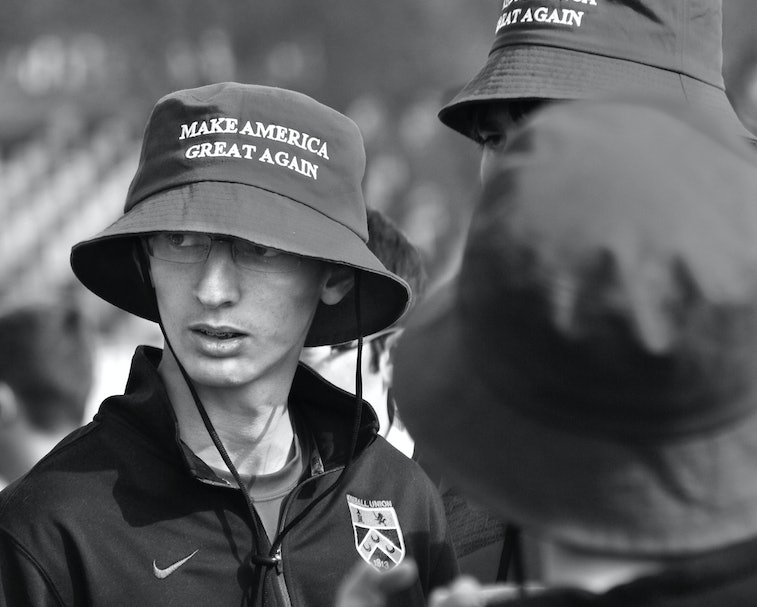 Last week, we put together a list of the best presidential campaign merch as a bid to make supporting your candidate inherently less swagless. While there were gems to be found, it doesn't change the fact that the territory is overwhelmingly bad. For the most part, campaign merch is either tedious or an overwrought attempt to be cool. And hey, that's fine. Putting together a coherent healthcare plan is more important than having good merch. But that doesn't make it any less fun to roast the calamities coming from the campaigns' wielders of Adobe Illustrator.

Today, with that in mind, we've rounded up the worst of the worst. Adorning any of this apparel instantly makes you an apt target for "ok boomer," regardless of your born date. Behold the deplorables.

Overall, Sanders' merch is the best in the field. But this... this is just a disaster. "Keep calm and..." is a trope that needs to be impeached, and it somehow looks even worse in this intentionally-butchered handwriting. Purposely bad design can sometimes work, but not when you're already working with a groan-inducing phrase.

Biden's logo is an eyesore, which renders almost all of his merch unwearable. Consider this hoodie a proxy for all his dreadful logo placements. Zip-up hoodies are almost more dated than Biden himself, and the logo here is way too big. No one beside a schlubby campaign aid should dare to be seen in this.

Get it? "Let's fucking go." But really, this may as well stand for "How do you do fellow kids?"

This shares the same design sensibilities as those bizarrely specific custom T-shirts that are targeted to you on Facebook. It looks like it should say, "You don't put any effort into your appearance, and that's why your wife is leaving you, Ted."

Nobody likes Mike, and nobody could like this hat. This blocky badge serves as nothing more than reminder that Bloomberg is a square.

The idea: not bad. The execution: not great! This should have been left in the drafts where it belongs. It looks straight off the screen, in the worst possible way.

Why are there so many words? Who's going to stop and read this? A T-shirt should not be formatted like a newspaper page.

It took me way too long to figure out what this means. Did someone ask for a hat saying to nix Donald Trump, but in the most muddled way imaginable?

Really, this is a roast of the image itself. They didn't even bother to render Steyer's logo accurately on this beanie. They just dropped a jpeg on a beanie and called it good. I have no idea what the beanie looks like in IRL, and that's a terrible way to get people to buy things.

This doesn't belong on a T-shirt. It belongs on a wall next to a sign that says, "Life is what happens between coffee and wine."

Yes, these are fine values or whatever, but having so damn many reduces the impact. What's funniest is "joy" being last, as if anyone's had a good time after nine consecutive buzzwords have been drilled into their head.

Let's set aside the fact that wearing Trump merch makes you a social pariah. This play on numbers is wordplay gone wrong. And is that a bullet before the "45"... why? Trump loves to invoke violence for no good reason.

Jerseys for teams that don't exist are rarely good, and this is no exception. The item's description reminds you just how lame it is when it says, "fit is not loose or over-sized."