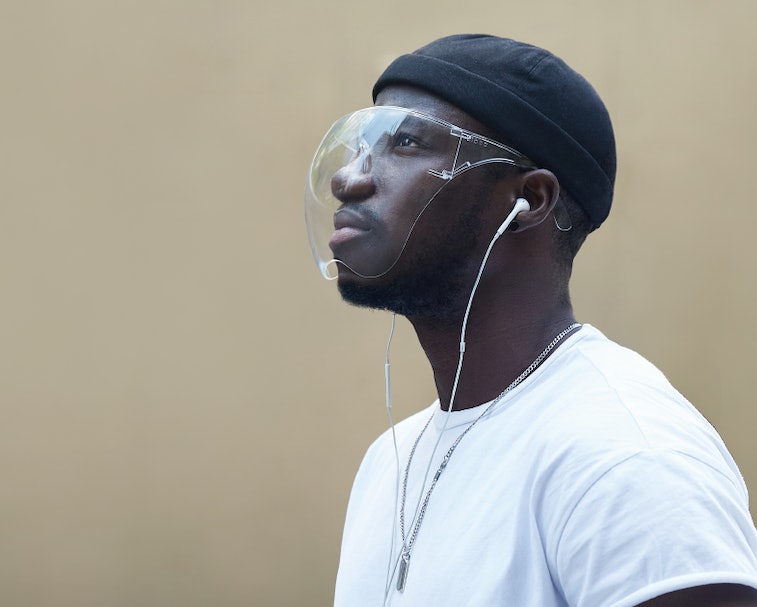 We have yet to see a face shield IRL that isn't a complete eyesore, but a crowdfunding campaign will bring to life one that does little to distract from your beautiful mug.

The Blocc face shield, created in South Korea, has the basic form factor of a pair of glasses, but instead of individual lenses, there's a large piece of lightweight polycarbonate that extends below the wearer's mouth. Each component is clear for a minimalist design, and it's spacious enough to be worn along with glasses and a face mask for extra protection. To clean it, just toss it under a faucet and hit it with soap.

At the time of writing, the Indiegogo campaign has already raised nearly $500,000, and deliveries are set to begin in September.

Anti-fog, anti-scratch — The Blocc face shield's polycarbonate has anti-fog and anti-scratch coatings to help keep your view unimpeded. Aerodynamic contours also make it suitable as a windshield for cycling, which will make it useful if we ever reach a point when the prospect of touching your face isn't terrifying.

Keeping your grubby, possibly COVID-19 covered mitts away from your face is the primary function — as the campaign makes no mention of keeping droplets at bay.

Made possible by 3-D printing — The Blocc has been in development for four months, with prototypes produced using a 3-D printer. It's been refined for comfort and style — although I'd say its aesthetic strength is less about what it adds to your look than what it doesn't. That nose bridge, though, it looks likely to hold up for long wears without causing any soreness.

What are your options? — A single Blocc shield can be purchased for $27, with bulk packages going up to 50 units for $625. The two sizes, medium and large, have the same width with heights based on the dimensions of female and male heads, respectively. For a more tailored fit, you can measure your own head and compare it to the 3D models provided by the campaign. Or just go for the large if you're looking to cover as much area as possible.

Six months ago, wearing a full-face, polycarbonate shield would have gotten you strange looks, even from New York City's famously imperturbable denizens. These days, you'll get those same looks if you don't have any protection at all. In six more months, shields like this could be considered essentials. We're looking forward to the photochromatic edition so we can leave the sunglasses at home.