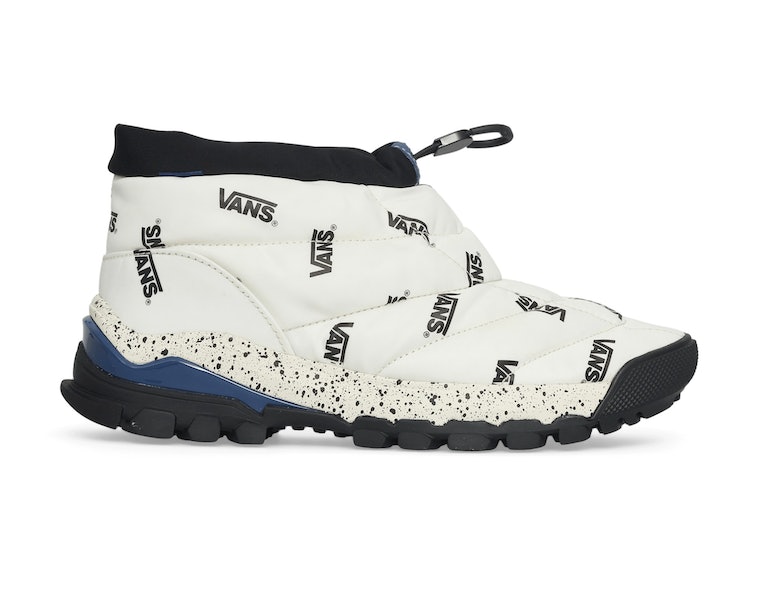 Vans has unveiled a brand-new winter silhouette, and it’s far from what you’d expect from the purveyor of classic skate shoes.

The Slip Hiker LX is an unusual winter boot featuring a quilted nylon upper for warmth and an aggressive outsole to keep you upright in slick conditions. No laces are necessary, as the mid-cut boot features an adjustable toggle on the cuff for securing your foot.

While the boot-bootie hybrid doesn’t have the makings of footwear ready to stand up to the most vicious conditions of winter, it does look to be a supremely cozy choice on days with little more than cold to throw at you. Think of it like The North Face’s puffer mule we love as a house shoe for winter, only one you can actually wear outside the house in the months ahead.

Print or solid? — The debut of Vans’ Slip Hiker LX comes in two options, the first with a white “Marshmallow” upper with all-logo print along with blue and black accents. The other nixes logos for a plain black upper to go along with bright orange accents and the same speckled midsole as its companion.

Within those midsoles is UltraCush EVA foam, Vans custom blend of lightweight cushioning that’s been in use for nearly 10 years on its LX line of more premium footwear. Together with the quilted upper, the foam should make for a more forgiving feeling than your standard winter boot — not to mention its particular back-country appearance.

Both variants of the Slip Hiker LX are starting to hit stores, and you can pick them up right now through Slam Jam for $138 a pair. Unless you’re in somewhere as warm as California, you’re going to need to give up your standard Vans for winter — but that doesn’t mean leaving the brand behind altogether for the season.