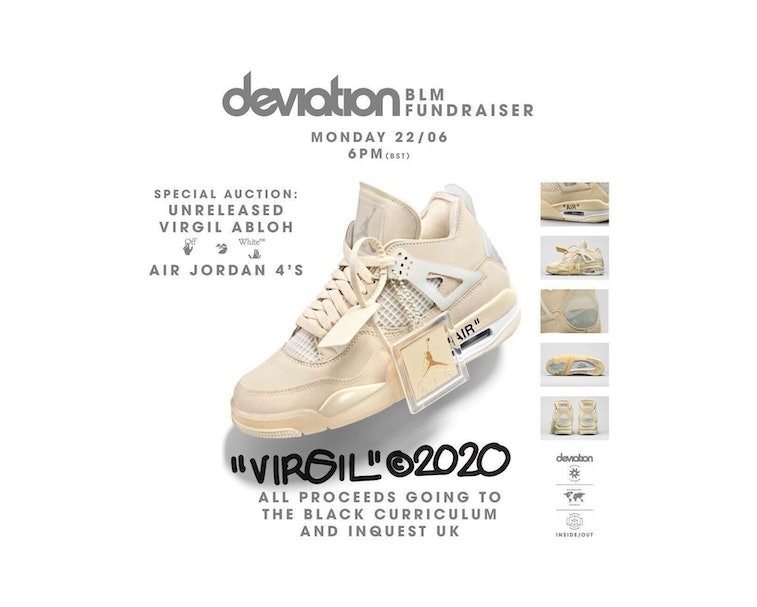 In support of Black Lives Matter, Virgil Abloh is auctioning off a pair of unreleased Off-White Air Jordan 4s.

The all-white pair, dubbed "Sail," have been rumored to release next month, but no official details have been announced. For the auction, Abloh is offering a pair in any given size that he'll sign himself. All proceeds will go to the Black Lives Matter initiative The Black Curriculum, which addresses the lack of Black British history in the UK's curriculum, as well as Inquest. The latter charity supports the families and investigations of those who've died at the hands of police or in state custody.

The price is already insane — Just a day after bidding opened on eBay, the highest bid is already at £18,300 (~$22,930). With just over two days remaining until the auction ends, the winning bid could end up being significantly higher. In addition to choosing their own size, the winner will also have their name written on the shoes by Abloh.

All eyes on Virgil — The Louis Vuitton men's and Off-White designer has faced criticism for his response to the ongoing Black Lives Matter protests across the United States. When streetwear and sneaker shops were looted, Abloh was admonished for his initial response to focus on what his friends lost in material products.

Making matters worse was self-inflicted confusion around his donation to the Fempower Community Bail Fund that appeared to be only $50. He later clarified that the screenshot he posted had been from someone else and that he had actually donated more than $20,000, but that didn't stop "two Virgils" (i.e. 50 x 2 = 100) from becoming a meme.

While you can chalk up the initial apparent stinginess to poor communication, his quick prioritization of stolen merchandise remains a valid misstep. Addressing it in a statement on Instagram, Abloh said: "If looting eases pain and furthers the overall mission, it is within good standing with me. I am fortunate enough to be able to rebuild my stores. And I am seeking out anyone who needs help rebuilding."

How much of a difference this Air Jordan 4 auction makes in the mind of his critics remains to be seen, as does whether he'll address the apparent lack of diversity in his Off-White design team.