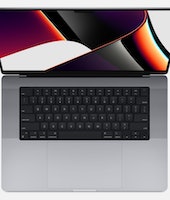 The cost of a new, fully maxed-out 16-inch MacBook Pro.

Two things were confirmed during today’s Apple Event: 1) the latest beast of a MacBook Pro is here, and 2) it’s going to cost you. A lot. The absolute cheapest, 14-inch Pro will still set you back about $2,000 (before tax), but you can easily end up paying much more than even that hefty starter cost. More specifically: the latest, fully tricked-out 16-inch MacBook Pro tallies up to a double-take-inducing $6,099.00 (also before tax, of course).

What you get for roughly a car down payment — So what does $6,100 get you, other than potential buyer’s remorse? Well, a whole lot of horsepower, to be honest. Apple’s new line of MacBook Pro’s are clearly angling for a return to professional industry usage (although we’re sure a lot of average customers are checking their credit card limits right about now).

Available a bit later than others — Apple is already accepting pre-orders, but don’t expect your big, bad MacBook Pro to arrive as quickly as, say, the new AirPods 3. According to the store page, customers can expect the 16-inch Pro with all the fixin’s to begin shipping between December 10 and December 23. The basic(ish) 16-inch MacBook Pro, however, will start rolling out the first week of November. All good things come to those who wait, right? Well, those who wait and can claim them as a tax-deductible work expense, really.