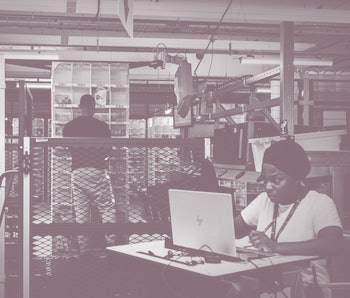 Amazon has begun taking disciplinary action against workers who violate social distancing rules at company warehouses, according to a document obtained by CNBC. Employees must keep at least six feet away from each other while working, as recommended by the Centers for Disease Control (CDC). Workers who violate the rule will only receive a written warning, but a second offense could mean being fired.

An Amazon spokesperson confirmed the rule to CNBC. “We are taking intense measures to ensure the health and safety of employees across our sites who are performing an essential role during this crisis,” the spokesperson said.

With cases of COVID-19 still climbing in the U.S. Amazon is right to remind its workers that social distancing is the best way to combat the spread of the virus. And Amazon’s workers are more essential than ever, given how many people rely on the company’s delivery services while in isolation.

But harsh disciplinary action like threatening their job security takes the initiative too far. Every Amazon warehouse employee is already worried about losing their job, and the company has already been caught out chastizing workers who protest its COVID-19 policies. Amazon’s employees still worry that going to work will increase their chance of catching COVID-19. They shouldn't have to self-police under threat of being fired, too.

Is social distancing enough? — Many Amazon warehouse employees have voiced concerns over working in factories where cases of the novel coronavirus have been discovered. Amazon has not been forthcoming about employees who have tested positive for the virus, according to some warehouse workers. Some are demanding that Amazon close factories where COVID-19 has been discovered and complete deep cleaning of them.

“We do not feel safe in our building anymore,” one worker said. “I’m frustrated with it.”

Not everyone is held to the same standards — Amazon has put some consistency into its enforcement: all employees are given face masks, sanitizer, and disinfectant wipes, and everyone is subject to temperature checks. But some workers worry that only the lowest on the totem pole are being watched carefully.

An Amazon warehouse employee in Michigan reported seeing several managers “huddling around the time clock." Three other warehouse workers said they were told by management that camera footage would be reviewed to check and enforce social distancing — they expressed concern that management would not be held to the same standards.

It’s time Amazon listened to its workers — The dissonance between Amazon’s steps to curb the spread of COVID-19 and what its workers feel would make them safer is obvious. But Amazon continues to resist.

Some warehouse employees have taken extreme measures to be heard. Last week, workers at Amazon’s Staten Island warehouse participated in a walk-out protest against the company’s lack of action in keeping workers safe. Rather than take this as a serious plea for increased safety precautions, Amazon fired one of the protest organizers and called it a day.

Amazon is taking some steps to curb the spread of COVID-19 in its facilities. But its workers don’t think it’s enough. For a company that loves to talk about how employee safety and health comes first, Amazon is consistently bad at listening to what its workers say they need. The threat of being fired may help in enforcing social distancing, but it also puts a the onus to stay healthy on an already-stressed workforce. If Amazon really wanted to help, it would listen to what would make its employees feel safest.