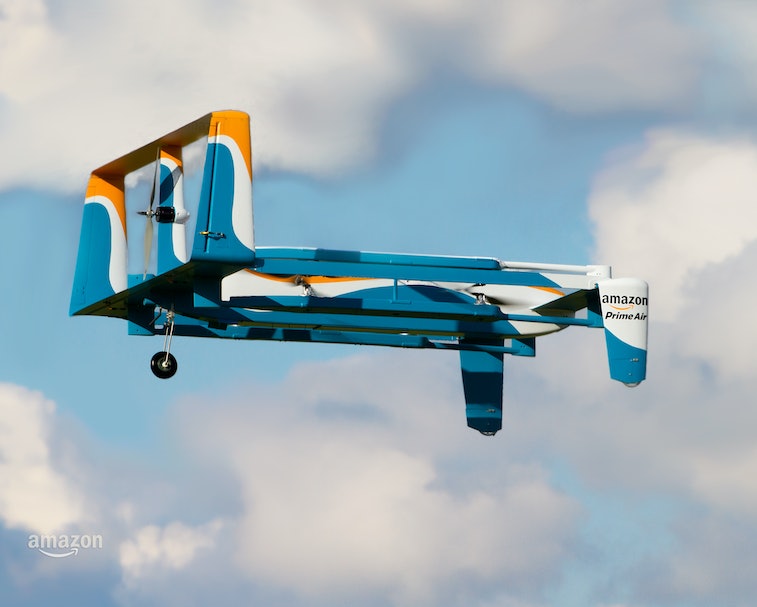 Amazon is racing to begin deliveries by drone, with hopes that it can complete its first official drone delivery on August 31, according to Business Insider. It's been nearly a year since Amazon said that its Prime Air drone delivery service would begin "within" months, but that hasn't happened.

Business Insider reports Amazon recently replaced Gur Kimchi, the head of Prime Air who has a heavy R&D background, with David Carbon, a veteran of Boeing who ran operations at its 787 Dreamliner factory. Carbon in an email stressed to worried employees that R&D on more advanced drone technology will continue even as resources are shifted to getting the service launched.

Nobody took Amazon seriously when it unveiled its skunkworks drone delivery concept back in 2013, but now the field is full of entrants hoping drones can revolutionize delivery. The Prime Air team is said to have more than 600 employees spread around the world working on the project, but that hasn't helped it overcome the numerous engineering and regulatory hurdles necessary to launch a commercial service.

Gimmick or genuinely useful? — It's still unclear whether or not drones will succeed as a mainstream method of delivery or remain a gimmick. Right now, amid the coronavirus pandemic, a way to deliver goods with minimal person-to-person contact looks great, and that could further encourage Amazon to make it happen, beyond the motivation of saving face while also offering a new way to get products to shoppers even more rapidly in the hopes it makes them buy even more often.

But drones can only carry lightweight items and the regulatory quagmire mean the company is expected to launch the service in a very controlled environment at first, which would still mean the project has a long way to go before it could be used to make deliveries in the most lucrative areas: High-density cities like New York. Also, of course, Amazon already delivers goods incredibly fast in many parts of the U.S., particularly in those same consumer-packed cities the drones would be best at serving.

Some use cases make sense — Drones could prove more cost-effective for completing deliveries than hiring human drivers at scale, though, and drones can cover long distances quickly — rival Google's Wing drones, for instance, can fly at 65 mph. Plus, the skies are (relatively) free of traffic. Food delivery in particular could fall in price and speed up simultaneously.

The elderly and homebound could receive necessary medication without leaving the house — something UPS is already offering via drone deliveries to a retirement community in Florida. Google has its own, similar service in development called that already delivers goods to residents of a small town in Virginia. The service has been well-received there, where anyone can order drone deliveries from an app on their phone.

There's no doubt someone is going to find a way to make drone deliveries legal, safe, and profitable. The only question is whether that company is going to be Amazon.