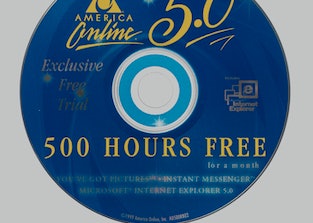 AOL is changing ownership once again, this time selling to private equity firm Apollo Global Management. The internet pioneer was bought by Verizon in 2015 for $4.4 billion and later combined with Yahoo, another relic of the early internet that the cellular provider purchased in 2017... and which has struggled to stay relevant in the face of Google and Facebook's dominance of online advertising.

Misfit toys — Verizon hoped that a combined Yahoo and AOL would be a force large enough to compete for advertising dollars with the likes of Google and Facebook. But trying to beat Big Tech is a losing game, so Verizon is raising the white flag. Apollo will fork over just $5 billion for 90 percent of the company, less than half of what Verizon paid, for brands that include Yahoo Finance, TechCrunch, and of course AOL itself.

That’s a huge fall from grace for American Online, as it was previously known, which once made billions selling dial-up internet service and famously bought Time Warner for a price of $182 billion. Today the company is just a web portal that provides services like news and email. Oh, and a subscription product... with 1.5 million paying customers. Wait, what?

Still a moneymaker — Despite years of languishing, old internet brands are surprisingly resilient. Yahoo remains the seventh-largest website on the internet with 900 million monthly users, while AOL has more than 1.5 million customers who subscribe to AOL Advantage, according to CNBC. The subscription service costs $9.99 or $14.99 per month and gives customers some nebulous technical support and identity theft protection. Basically, it sounds like AOL sold some older people on services they really don’t need, or which they haven’t worked out how to cancel.

Regardless, those numbers mean AOL is still bringing in $180 million in annual revenue. A company like Apollo could easily cut costs to the bone and let the AOL money machine go burr for several more years. Though private equity firms claim their strategies help faltering companies turn their fortunes around, critics argue more often than not they make it impossible for businesses to dig their way out of trouble by trimming every ounce of fat, gutting anything of value, and charging excessive “management fees” — see the likes of Sears or Toys-R-Us for examples.

Apollo, in its defense, says it will grow Yahoo-AOL through investment and management. Which is the perfect sort of vagueness we expect from private equity buyouts.

AOL reported back in 2015 that more than two million people were still paying for $20 per month dial-up internet, a level of service so slow that it could take as much as four minutes to load a large GIF. These customers may be in rural communities where broadband remains stubbornly scarce, or they simply forgot to cancel service.