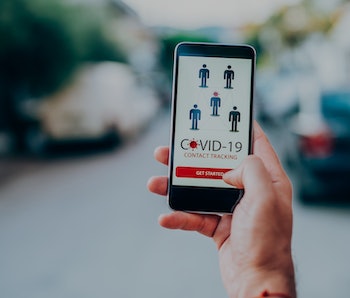 Apple and Google are rolling out a new, automated system for creating COVID contact-tracing apps. Under Exposure Notifications Express, public health authorities can create contact-tracing apps simply by configuring a file to meet their state's guidelines — such as setting the proximity to a COVID-positive person required for the apps to trigger an alert. iOS and Android will then automatically create the necessary software.

The new system is interoperable, meaning users of a contact-tracing app in Virginia could be alerted about exposure from Maryland app users. The companies say that no data is being collected that could identify the individuals who have been exposed — if someone tests positive for coronavirus, they can tell the app they've been infected and it will notify other people whose phones have passed in the previous few days. Public health officials can also include guidance in their configuration files that tells someone what to do if they test positive.

The iOS version goes live today, while Google will deploy it to users with Android 6.0 or higher beginning later this month.

All hype little substance — Contact-tracing apps haven't really seen mass adoption since Google and Apple announced their joint initiative to build the tech into their OSes, partly because local governments still had to build the apps. So far 25 states are considering building contact-tracing apps, and only six of those have actually began making them. This new plug-and-play solution means states have really no reason not to.

Health experts have questioned the efficacy of app-based contact-tracing over humans knocking on doors and making phone calls. Users have to opt-in and install the apps, which is a lot to expect, especially of people in countries like the U.S. who are often untrusting of public officials. In a small country like Iceland, about 40 percent of citizens have adopted the local app, and in South Korea where people trust their government, the number has been 25 percent. Not to mention officials need to have appropriate systems in place to deal with people after they've contracted the virus.

App-based contact-tracing can be helpful to a degree, but it's not a panacea. Even still, now that it's easy to make the apps, states have no reason not to do so. So far, Maryland, Nevada, Virginia, and Washington, DC have committed to deploying the new system. Tech companies are at least trying to assist the states where the federal government has not.