Apple is returning to CES after nearly 30 years... on a panel 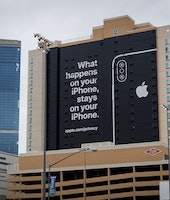 The last year that Apple made an appearance at CES.

A tweet I came across on summed it up nicely: The last time Apple had an official presence at the Consumer Electronics Show (CES), most tech YouTubers hadn’t even been born. Since 1992, the year it introduced its Newton personal digital assistant, the company had skipped CES — but now it’s about to make a return. Well, kind of. According to the CES 2020 agenda, Apple’s Senior Director of Global Privacy Jane Horvath will be part of privacy-focused panel, along with an executive from Facebook and FTC Commissioner Rebecca Slaughter.

Not-so-subtle troll — While Apple won’t have a booth on the show floor at CES 2020, at least it will be at there in an official capacity — not just trolling other tech companies. Last year, Apple had a massive billboard across from the Las Vegas Convention Center, where CES is hosted, which took a dig at companies (hi, Facebook) for not protecting people’s data. “What happens on your iPhone, stays on your iPhone,” read the massive ad.

Can you watch the panel? — Yes. If you're not physically at CES but want to see what Apple’s Horvath will be discussing during the roundtable, entitled "What Do Consumers Want?” CES will be livestreaming the event on January 7 at 1PM PT/4PM ET.