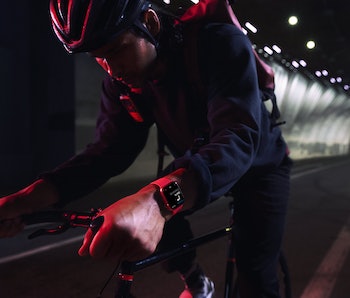 We’re expecting some serious upgrades with the upcoming version of the Apple Watch, particularly after the rather minor upgrade we saw with the Series 7. Right on schedule, months ahead of the Apple Watch Series 8’s expected release in the fall, the rumors are starting to flood in on the new smartwatch.

Top rumors include the release of a third model, in addition to the existing 41 and 45mm Series 7. There are also rumors of a more rugged Apple Watch meant for active use, and whispers of a refreshed Apple Watch SE.

How big will the Apple Watch Series 8 display be compared to Series 7?

Apple could bump up the Apple Watch Series 8’s display to nearly two inches, according to analyst Ross Young. “New size is larger, 1.99,” Young said in a tweet. Young has a semi-accurate track record when it comes to mining the supply chain for information on new display sizes that Apple is considering for unreleased devices.

Apple currently sells the Apple Watch in the following sizes:

As Apple keeps increasing the size of the display, we’re wondering how big is too big? If we continue the trend, we’re eventually going to hit a point where it feels like we’ll have a sizable chunk strapped to our wrist instead of something meant to be slim and low-profile.

What will the Apple Watch Series 8 “Pro” look like?

Bloomberg’s Mark Gurman reports that the “Pro” edition of the next Apple Watch will not have flat sides as the rumors have been suggesting. In May, we saw renders from Jon Prosser and Ian Zelbo showing off a flat face and edges, but Gurman’s latest newsletter suggests a more modest redesign that is “an evolution of the current rectangular shape, and not circular.”

Prosser previously suggested that Apple would be going with a flatter design for the Series 7, so it could still be a design that Apple is holding in its back pocket. It’s not too farfetched since a flat-edged Apple Watch would match the iPhone. At least for now, it looks like the Apple Watch will retain its curves for the Series 8.

Can the Apple Watch Series 8 check your temperature?

Gurman also reports that the Series 8 could have temperature detection for the standard and “rugged’ version. He says that it wouldn’t give users an exact temperature but could detect a fever. This feature is expected to be excluded from the entry-level Apple Watch SE version.

Adding temperature detection makes sense since Apple packed watchOS 9 with a bunch of health tracking features, like a way to detect atrial fibrillation and a medications tracker. It’s a no-brainer for Apple. since the Apple Watch already functions like a fitness tracker, and many models come with temperature sensors.

That may sound disappointing, but remember this: Smartwatches don’t really need year-over-year performance improvements like chipsets on phones, tablets, laptops, and desktops do. Apple’s S6 chip was alredy years ahead of the competition in 2020, so it technically doesn’t need to speed up performance for the Series 8.

How many hours will the Apple Watch Series 8 battery last?

We were originally expecting Apple to announce some battery life upgrades through watchOS 9, but that wasn’t the case. There’s still the lingering possibility that Apple will improve battery life with the Apple Watch Series 8; Bloomberg’s Gurman previously reported that a low-power mode was coming.

The Apple Watch Series 8 could really use some kind of battery life improvement since the Series 7 only gets 18 hours on a full charge. A low-power mode that extends its battery life could make it more competitive with the growing array of fitness trackers out there which usually get several days of use on a single charge.

What will the larger Apple Watch Series 8 be called?

What features could the Apple Watch “Pro” have?

Gurman says that the “Pro” version will offer the nearly two-inch display that’s expected to be shatter-resistant, as well as new sensors and higher-end materials. Gurman is speculating that the more rugged case will be made of titanium, but the overall smartwatch would offer better hiking and swim tracking, along with a longer battery life.

Going off these details, it’s clear that Apple wants to compete with the pro edition of Samsung’s upcoming Galaxy Watch 5. Even more so, the “Pro” Apple Watch could be aiming for Garmin’s smartwatch customers who prefer to stay within Apple’s device ecosystem.

When will the Apple Watch Series 8 come out?

We don’t have any indication that Apple will divert from its usual release schedule for its smartwatches. If that’s the case, we can expect the Apple Watch Series 8 to drop sometime in September.

How much will the Apple Watch Series 8 cost?

All rumors also point to the same pricing as the Series 7, which starts at $399. That said, inflation is through the roof, so it wouldn’t surprise us if Apple raised the prices of the Apple Watch. As for the rumored Apple Watch “Pro,” Gurman says it’s expected to start anywhere between $900 and $999.