Apple's investing in a huge new campus in North Carolina 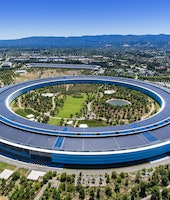 The estimated cost of the new facility.

Apple today announced a major plan to invest $430 billion in the United States over the next five years, including by pumping $1 billion into North Carolina and opening a new campus there. The project is intended to create at least 3,000 new jobs in machine learning, artificial intelligence, and software engineering.

Big money — Don’t expect the North Carolina campus to look like Apple’s iconic spaceship-like headquarters in Cupertino, however. That campus was designed by the late Steve Jobs and cost Apple more than $5 billion by the time of completion.

As part of the initiative in North Carolina, Apple will establish a $100 billion fund to support infrastructure spending in the state for things like broadband, roads and bridges, and public schools.

Ahead of plan — Back in 2018, Apple announced a goal of investing $350 billion in the U.S. over five years, but the company says its new commitment reflects that it has significantly outpaced that original goal. Among other projects, Apple is expected to begin welcoming employees to its new $1 billion Austin, Texas campus next year.

The company isn’t just adding jobs in software, but is also investing some of that money in U.S.-based manufacturers of everything from glass to the sensors used in iPhone cameras. Through Apple’s Advanced Manufacturing Fund, the company awards money to companies that innovate in the development of breakthrough technologies like 5G and sustainable material production.

Politicking — In today’s announcement, Apple said that it now supports more than 2.7 million jobs across the country between direct employment and spending with U.S. suppliers, manufacturers, and developers of iOS apps. It also wants you to know it pays a lot in taxes. “Apple is the largest taxpayer in the US and has paid almost $45 billion in domestic corporate income taxes over the past five years alone,” it said.

Apple has long touted its investments in the United States. But if we’re being honest, it has to invest if it wants to keep growing and making more money. It’s just smart politics to rebrand this as a contribution to America. Especially as people worry more about the influence technology companies like Apple have over our lives today, promoting its hiring can be a way to try and sway people’s opinions about it.

But the investments, and the taxes it pays, are necessary. Apple paints them as some voluntary contribution to society when they’re really not, and that’s maybe why these announcements have always felt weird. Nonetheless, it’s good news for techies in North Carolina, and will doubtless be good for the surrounding businesses, too.