Tearing down the Arecibo telescope is the right call, but it really sucks

“Although it saddens us... we believe the structure should be demolished in a controlled way as soon as pragmatically possible.” 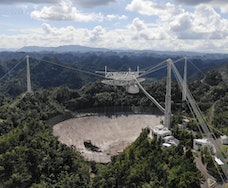 Update: On Tuesday, Dec. 1, the telescope at the Arecibo Observatory collapsed. Though officials had planned to soon begin its controlled destruction, the existing damage was too much for the structure to handle and it ultimately came down on its own. The Associated Press reports that the overhanging 900-ton receiver platform and Gregorian dome fell onto the dish below at 7:56 a.m., destroying it. “It was a snowball effect,” Ángel Vázquez, the telescope’s director of operations, told AP. “There was no way to stop it... It was too much for the old girl to take.” The original article follows.

It is a grim day for astronomy. The National Science Foundation announced today that it has decided to decommission the 305-meter radio telescope at the Arecibo Observatory in Puerto Rico after back-to-back structural failures.

The enormous instrument has for decades kept watch on the cosmos, becoming a central tool in our efforts to understand the universe, from leading the discovery of exoplanets and mysterious extragalactic radio signals to monitoring space weather. Its observations have even been used to investigate the possibility of extraterrestrial life. Arecibo went dark back in August and its fate has remained tenuous in the months since, worsening at the beginning of November when a second critical component broke. Now, after multiple assessments, officials say it is simply too dangerous to fix.

“Our team has worked tirelessly with the NSF looking for ways to stabilize the telescope with minimal risk,” said Alexander N. Cartwright, President of the University of Central Florida, which manages the site. “While this outcome is not what we had been working towards, and we are disheartened to see such an important scientific resource decommissioned, safety is our top priority.”

The telescope and related structures, including the overhanging Gregorian Dome, will be demolished starting in the next few weeks.

The beginning of the end — Though the telescope has withstood decades of natural disasters, notably sustaining damage during 2017's Hurricane Maria, its issues were never insurmountable until Aug. 10 of this year, when an auxiliary cable that helps to hold up its 900-ton overhanging metal platform broke. The platform, which hovers 450 feet above the radio dish, is supported by cables that connect to three towers. According to NSF and UCF, the broken cable slipped out of its socket and sliced a 100-foot gash in the dish below. Though it would cost millions of dollars just to properly assess the damage and gather the necessary equipment, the first steps toward repairs were soon underway. Then the second cable broke.

On Nov. 6, a 3-inch-thick main cable connecting to the same tower snapped despite conditions appearing nowhere near the degree of strain that should cause it to fail. And this time, the damage was far more substantial, according to UCF:

Unlike the auxiliary cable that failed at the same facility on Aug. 10, this main cable did not slip out of its socket. It broke and fell onto the reflector dish below, causing additional damage to the dish and other nearby cables. Both cables were connected to the same support tower.

It was “unexpected,” the NSF said in a news release today, “raising the possibility of other cables being weaker than expected,” too.

After reviewing the assessments of multiple independent engineering companies, the NSF has concluded that there is no way to stabilize the massive structure without putting construction workers and observatory staff at serious risk. Even conducting stress tests to assess the remaining cables could be enough to bring the whole thing down, Thornton Tomasetti, the engineering firm working for UCF, determined. It will instead be dismantled as soon as it is safe to do so.

“Although it saddens us to make this recommendation, we believe the structure should be demolished in a controlled way as soon as pragmatically possible,” the company’s recommendation for action letter stated.

Taking the world’s second-largest radio telescope offline for good is no small decision and comes as a devastating loss to the astronomical sciences community. Since its construction in the early 1960s, the Arecibo Observatory has helped to refine our understanding of planets in our own stellar neighborhood and in 1992 discovered the first-known exoplanet, or a planet beyond our solar system. Thousands have been spotted since. Arecibo has led the discovery of pulsars — even binary pulsars — and millisecond-long radio bursts from outside our galaxy. It’s aided the search for gravitational waves.

Arecibo’s scientific importance even pushed it into the scope of pop culture; it was one of several facilities featured in the 1997 movie, Contact, based on a Carl Sagan novel of the same name, and made appearances in The X-Files and a James Bond film.

But life and safety must always come first. Thus the decision is “necessary, although unfortunate,” NSF Director Sethuraman Panchanathan said in a statement. “For nearly six decades, the Arecibo Observatory has served as a beacon for breakthrough science and what a partnership with a community can look like. While this is a profound change, we will be looking for ways to assist the scientific community and maintain that strong relationship with the people of Puerto Rico.”

An enduring legacy — Of course, there are still discoveries to be made from its existing observations. As Cartwright noted in today’s announcement, “At a time when public interest and scientific curiosity about space and the skies has re-intensified, there remains much to understand about the data that has been acquired by Arecibo.”

The NSF has made it clear that the observatory will not be going completely dark with the death of its flagship telescope. For Puerto Ricans, the local treasure has long been an educational destination for school children, and its role in international research efforts is a significant one. There are plans to restore the observatory’s LIDAR facility for future geospace research, the NSF says, and operations will eventually resume at the visitor center and the offsite Culebra facility, which conducts weather analyses. Down the line, it may find itself home to new educational programs.

Whatever its future purpose may be, everyone seems to be in agreement that to abandon the historic site entirely would be… well, as Jodie Foster’s Ellie Arroway put it in Contact, “Seems like an awful waste of space.” Alas, today we pour one out for Arecibo.