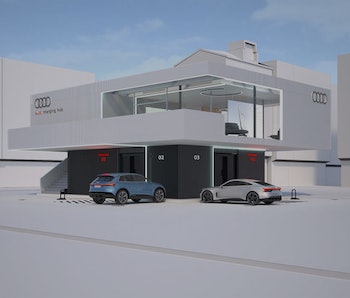 Audi is piloting a vehicle charging concept that would see EV owners fuel up their cars at hubs that utilize stationary battery packs charged overnight when electricity demand is low.

Electric infrastructure — The central idea behind the concept is that, if electric vehicles are to replace gas-fueled cars, the demand for energy is going to put a major strain on electrical grids worldwide. In a state like California that regularly suffers from blackouts, the concern is serious and could require the construction of costly new power plants.

A different way — Audi thinks that it can help address the impending issue in a sustainable way by repurposing decommissioned batteries from old electric cars to create giant stationary battery cells. Charging them overnight from DC power when demand is lowest, drivers would come during the day and charge up their cars from stored energy; solar panels on the roof would be able to keep the batteries charging during daytime. Drivers schedule a time to charge their vehicles, ensuring electricity demand is predictable and consistent.

Some utilities around the U.S. have tested the concept of controlling chargers directly, asking drivers to specify when they’ll need their car next so the utility can charge it up when electricity is most plentiful.

Audi plans on selling 20 fully electric vehicles by 2025, and if it’s going to sell lots of them it’s going to need compelling charging solutions, especially given the reach of Tesla’s network.

The station Audi is testing will be based on flexible container cubes. Each cube will house repurposed batteries delivering storage capability of up to 2.45 MWh. Six charging stations in all will have outputs of 300kW, allowing for fast recharges.

Solutions — Experts think that these type of creative solutions are going to be necessary to prevent a problem where everyone owning an electric car plugs in at the same time at night and overloads electrical networks. Such stations could discourage people from installing transformers in their own homes to charge up their cars. Most people who live in urban environments wouldn’t need to charge their cars every night anyway. An Audi E-Tron has a range of 222 miles, while the average American drives 29 miles per day.

Audi’s proposed charging hubs would feature a “premium” lounge area at the station with snacks and drinks, giving drivers something to do while they wait for their vehicle to charge.