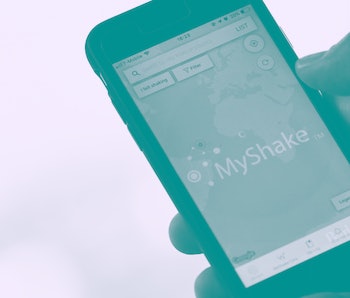 California is turning its predisposition to earthquakes into technological innovation. The state’s app for early earthquake warnings, MyShake, sent out its first-ever public alert on Tuesday morning.

The earthquake in question registered with a magnitude of 4.3 and began in the mountains between the San Joaquin Valley and the Central Coast.

A small but promising start — Because Tuesday’s earthquake was relatively small, only about 40 people were sent notifications about the warning. The majority of the alerts went to residents of Paso Robles, a small town near the epicenter.

Even a few seconds matter — The app doesn’t aim to give Californians hours or even minutes of warning; rather, it hopes to provide users with just enough time to stop what they’re doing and prepare for the earthquake to roll in. In the case of Tuesday’s earthquake, the system gave users 8.7 seconds’ notice: just enough to look for cover.

A new, lower threshold — The MyShake app, as well as Los Angeles’ similar ShakeAlertLA app, is triggered by any earthquake of magnitude 4.5 or higher. This is generally when people can notice the earthquake indoors. The threshold actually used to be higher, but officials lowered it after two LA-area earthquakes failed to set off the alert system.

The system isn’t perfect — This particular earthquake shouldn’t have set off the alert, as its 4.3 magnitude fell below the app’s threshold. The system was set off because the initial reading for the earthquake came in at 4.8. The earthquake was so mild that Paso Robles’ fire department didn’t receive a single call about damage.