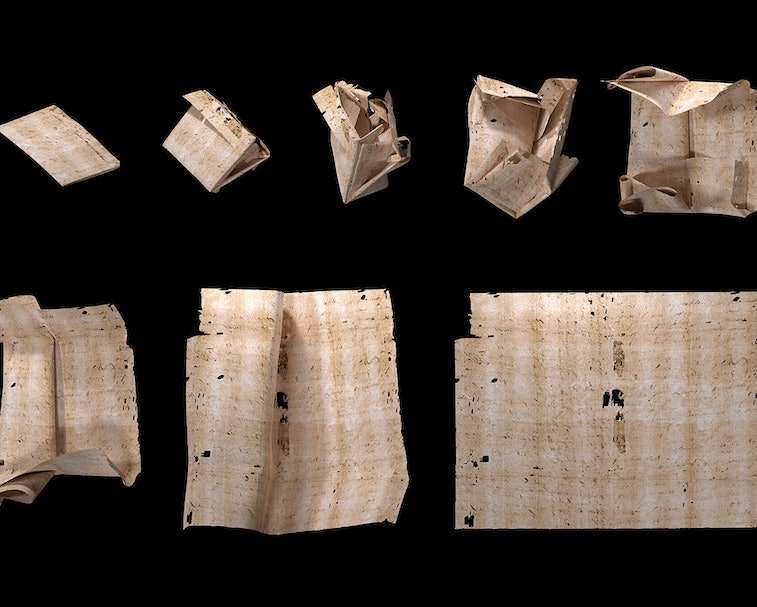 Until the 1830s, letters sent around the world were secured through a method called “letterlocking,” in which the paper was folded so intricately that opening it up broke the folds, or the “seal,” signaling to anyone that the letter had been opened.

It was a shockingly sophisticated way of protecting against snoopers who might have intercepted private communications — a form of encryption long before its digital equivalents. But in recent years, historians have come upon troves of unopened letters that, for some reason or another, never reached their destination. Opening these letters by hand would risk tearing and damaging the documents, something that nobody wants to do to fragile pieces of history.

CGI unfolding — Fortunately, researchers at the Massachusetts Institute of Technology (MIT) and other institutions have landed on a method to open the letters without opening them at all. The technique involves using advanced X-ray machines that scan a letter and then create a three-dimensional image revealing the contents and the structure of the paper from the inside. From there, a computer program can analyze and undo the folds to create a virtual, unfolded replica of the letter, including any handwritten text contained within.

According to the team, one of the letters digitally opened was from the Brienne Collection, a postal trunk of unopened letters found in The Hague. Dated July 31, 1697, and sent from Lille, France, the letter requests a certified copy of a death notice and asks for news of the recipient’s health.

A full 577 letters from Brienne Collection had never been unlocked before and could offer insights into early modern Europe and the region’s changing politics, religion, music, drama, and patterns of migration.

Digital meets a worthy competitor — It currently takes several days for the program to virtually unfold a letter, but the team says it is updating its code to bring that time down to several hours. Before the new program was created, it took a decade for scholars to discover that Mary, Queen of Scots secured a letter to her brother-in-law using a distinctive spiral stitch mechanism.

It’s quite fascinating to think that beating an analog piece of security from centuries ago required using such sophisticated digital technology from today. More than 250,000 letters that use letterlocking techniques have been studied by the team, and they say that 12 common formats were discovered. Different variations on the fold with a combination of tucks, slits, and folds could prevent a stranger from easily guessing how to open a letter and fold it back up discreetly.