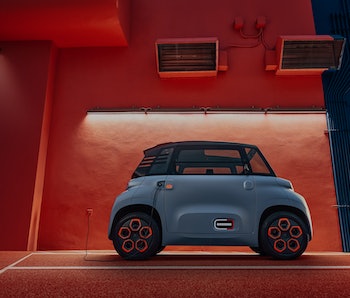 French automaker Citroën has unveiled the Ami (the French for “friend”), a “light quadricycle” that’s fully-electric, can be charged from a standard power outlet, has doors that open in opposite directions, and costs less than $7,000 (€6,000). Because it’s classified as a moped or scooter rather than as a car, French 14-year-olds — and 16-year-olds in most other EU countries — will be able to drive the Ami without a driver’s license.

Even wilder is that in addition to being able to order the Ami online directly from Citroën, buyers will be able to get it from French electronics retailer Pnac, and its subsidiary Darty, making it akin to buying a car on Amazon. Buyers can get the Ami delivered, and if they’re willing to put down half upfront, they can pay it off over 48 months at €20 ($22.30) a month. The Ami will also be available through ride-sharing company Free2Move.

No speed racer — The two-seater has a range of up to 44 miles and a top speed of 28 MPH. It’s powered by a 5.5kWh battery pack and a 6kW motor and, because it’s less than 8 feet long and 5 feet wide, it’s possible to park two Amis in a regular-sized parking space. That top speed means it won’t be taking to the highway (thankfully) but should be fine in congested, European city centers.

Many of those same city centers are overrun with combustion-powered scooters and mopeds, which are not only more dangerous for their riders than micro-cars like the Ami, but annoyingly for neighbors, prone to emitting awful, high-pitched noises when accelerating.

The Ami started life as the Ami One concept and is designed to minimize the number of components needed to build it, which helps keep the cost down. That frugality is also why you’ll need your own phone and Bluetooth speaker if you want audio in the Ami, as demonstrated in the product shot that includes an Ami-branded Ultimate Ears speaker.

Don’t expect to see it in the U.S. — Citroën stopped selling its cars in the U.S. decades ago, and though there’s a Free2Move car-sharing service in Washington D.C., it uses Chryslers. We could imagine a market for the Ami in New York, San Francisco, and other large cities, but we don’t see it being popular elsewhere.

Orders for the Ami open in France on March 30, and it’ll go on sale in Spain, Italy, Belgium, Portugal and then Germany in the months to follow. The first deliveries to customers will happen in France in June 2020.