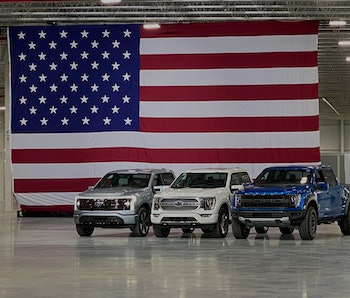 Ford’s upcoming electric pickup truck, the F-150 Lightning, made a public appearance today at a press event held by President Joe Biden in which he reaffirmed American commitment to investment in electric vehicles and alternative energy. Ford’s got an official unveil event for the truck tomorrow, May 19, where we expect to learn more specifics like pricing and specifications.

Today’s event was held at Ford’s electric vehicle plant in Michigan, called the Rouge Electric Vehicle Center. “The future of the auto industry is electric. There’s no turning back,” Biden said before taking Ford’s new pickup truck for a spin.

The F-150 Lightning could mark a major milestone for the automotive industry — trucks are the most popular vehicles in America (and the F-150 is the most popular among them), but there are yet to be any electrified versions available to the public. President Biden hopes increased investment in domestic manufacturing of electric cars will reduce reliance on China, which has been pushing hard to increase its global influence by becoming a leader in cutting-edge technology.

Throwback Tuesday — The Lightning branding of the new vehicle harkens back to 1990s when Ford sold a high-performance version of the F-150 under the name “SVT Lightning.” That vehicle was discontinued in 1995, but its new use implies Ford wants to emphasize that the all-electric F-150 will provide more power than its standard, combustion engine trucks.

The automaker has previously stated the F-150 Lightning will feature dual-electric motors and deliver more horsepower and torque than any F-150 available on the market today. Its battery is also dual-purpose, working both to power the vehicle and as a mobile power generator for work sites or even campsites.

Biden was allowed to drive the F-150 Lightning himself, commenting afterwards that “this sucker’s quick!” The vehicle was covered in camouflage tape that’s used on prototype cars, but it was easy to see the contours of the truck nonetheless.

Don’t fix what ain’t broken — The vehicle shown off today isn’t a great departure from the existing F-150 design. That’s probably a good thing — Tesla’s Cybertruck completely rethinks what a truck is supposed to look like, but its striking design might not appeal to existing truck owners who overwhelmingly love the F-150 and have made it the most popular truck in America for two decades.

Considering the transition to electric will already be a big leap for many truck owners, keeping the design conservative might make it more likely they’ll embrace the change. Trucks have become more fuel-efficient over time, and truck owners need to be convinced that an electric version will not only be comparable but better than what they already have. Just saying it’s a moral imperative to go green probably isn’t good enough when global warming is such an abstract concept to many.

Pricing for the F-150 Lightning is unknown but is expected to start around $70,000. That’s quite a lot, but not surprising for a new class of electric truck that’s supposed to outperform anything out there. And the price is less steep when you compare it to super-loaded F-150s like the King Ranch model.

Ford has said the new vehicle is slated to reach customers in mid-2022. If global supply shortages don’t get in the way, that is. Just about every automaker is facing headaches right now — Tesla hopes to deliver the first Cybertruck’s this year, but CEO Elon Musk has caveated that by saying it will only happen if the company is lucky. Volume deliveries are expected to start sometime in 2022.