France jumps on the bandwagon, says it'll make bionic soldiers to keep up

“Not everyone shares our scruples and we must be prepared for whatever the future holds.” 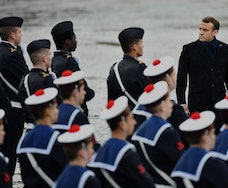 As with many technological advancements, bionic enhancements will likely head to the military first. France, not wanting to be left behind, has decided to start developing such enhancements for its military, according to the BBC. France is hesitant to jump into this kind of technology for these purposes, but acknowledges that it needs to stay competitive with foreign powers.

Thirty-two pages of hand-wringing — France’s military ethics committee released a report greenlighting the creation of supersoldiers on Tuesday. The committee is easing the country into this new frontier, and the report reads a bit more like what not to do than a blanket approval.

"Human beings have long sought ways to increase their physical or cognitive abilities in order to fight wars," reads a BBC translation of the report. "Possible advances could ultimately lead to capacity enhancements being introduced into soldiers' bodies."

The committee of 18 people, ranging from military personnel to philosophers, was particularly concerned about the impact of augmenting soldiers. Parameters for implementation included many thoughtful guidelines, from studying short, medium, and long term effects to determining if an enhancement is addictive, and to ensuring that any changes made won’t infringe on the Geneva Conventions — including anything even vaguely eugenicist. They were as concerned with soldiers’ impact on civilians as with their successful transition back into civilian life with these bionic abilities.

The committee is open to augmentations that can improve a soldier’s physical, cognitive, perceptual, and psychological abilities as well as medical treatments. These enhancements could involve tracking other members of a unit while in combat to reducing stress when captured.

Both the committee and Defense Minister Florence Parly stated the current position on these innovations is open to regular review and may change in the future. While that gives France wiggle room to be more aggressive, the report's air of hesitance suggests future changes could go in the other direction, especially if everyone else pumps the brakes on their supersoldiers.

Everyone’s doing it, we think — Parly formed this ethics committee a year ago with its focus trained on augmented soldiers and autonomous lethal weapons systems. It’s no secret that the U.S. is working on bionic soldiers of its own, but we seem more interested in Iron Men while France is taking a Captain America approach. While China and Russia’s forays into this area seem incredulous and speculative, having three of the world’s most powerful countries working on their own superheroes is enough to scare any country with the means to get into the game themselves.