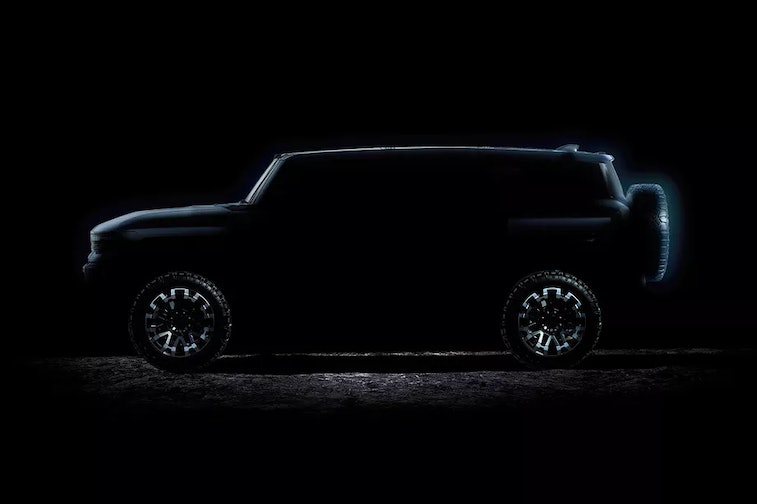 General Motors last year announced the revival of its Hummer brand with an all-electric pickup truck, and now the automaker is getting ready to show off an SUV version on April 3 at 5 p.m. E.T. There’s no word on when the Hummer SUV will enter production; GM says it will begin slapping together the pickup at the end of this year, with the priciest models reaching customers first.

As part of today’s announcement, GM also took the time to show off the Hummer EV handling sub-zero, snowy conditions in Michigan. The vehicle was tested on various slippery surfaces, including snow, ice, steep, and split-mu grades. GM says a key purpose of the tests was to calibrate the Hummer’s electronic stability control system, which uses automatic braking of individual wheels to keep the vehicle headed in the driver’s intended direction without spinning out.

Boosting EV adoption — The introduction of electric trucks could offer a major boost to efforts to get Americans out of gas-guzzling trucks. The most popular cars in America are SUVs and trucks. Sales of diesel pickups and SUVs increased 28 percent in 2020 while overall car sales declined 14 percent.

GM last year unveiled another electric SUV last year under its Cadillac brand, dubbed the Lyriq. The vehicle isn’t expected to arrive until 2023.

The biggest challenge with electric trucks remains the expensive battery packs. The Hummer EV will be expensive with starting prices of $112,595 for the first model, before falling to $80,000 by 2023 on smaller, less potent iterations. Meanwhile, automakers have been adding diesel engine options to SUVs and pickups in recent years to increase fuel efficiency.

The 2008 recession and subsequent rise in fuel prices that led to the original Hummer’s demise are not an issue today. New technology and higher performance could drive interest in electric trucks, though. It’s both fitting and bizarre that the Hummer, notoriously one of the world’s least-eco-friendly vehicles in its gas-powered configuration could become one of the poster children for big EVs.

Race to market — With many electric trucks coming to market besides the Hummer, including an electric Ford F-150 and Tesla’s Cybertruck, we’ll soon be able to see whether or not loyal buyers of work vehicles are willing to make the switch. According to a recent study by Cox Automotive, more than two in five consumers in the market for a pickup truck are considering an electric model.

The biggest consideration for most consumers according to the study is price... followed by performance. On that second point, promises are high, with GM claiming the Hummer EV will have up to 1,000 hp and 11,500 lb-ft of torque. Tesla says its Cybertruck will be more capable than the current Ford F-150 with a maximum towing capacity of 14,000 pounds and a range of 500 miles on a charge. The real issue, then, is going to be price.