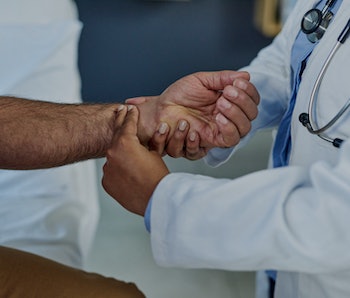 Google is updating Fit, its health tracking app that connects to smartwatches and trackers, with the ability to measure respiratory and heart rates using smartphone cameras. Available to Pixel owners starting next month, the company says it plans to expand the new features to more Android devices over time.

In order to measure vital signs without wearable sensors, Fit guesses your respiratory rate, or breathing rate, using a rear-facing smartphone camera to look at the movement in your chest. Similarly, placing your finger on the rear camera will allow Fit to see tiny changes in the color of your skin and approximate heart rate. Samsung has offered the same heart-rate measurement technique on its phones for years, but not the breathing analysis.

Maybe buy a Fitbit — Google says that it has completed initial clinician trials and validations to ensure the accuracy of the product, and it made efforts to train its computer vision to work across all skin tones and ages. The company wants to support more smartphones; the need to ensure accuracy is probably why the features are limited to its own Pixel phones for now.

Google says you'll be able to save your pulse and breath metrics in the Fit app so you can compare them alongside your other health stats.

Higher respiration rates can indicate certain medical conditions, and being able to measure it could be useful for people who don't own and cannot necessarily afford a wearable. You'll need to stand in front of your camera for 30 seconds for it to get a reading, though, which is somewhat inconvenient. And if you're exercising you won't be able to monitor your heart rate while you work out.

Google now owns Fitbit, which sells a range of health monitoring wearables with the cheapest, the Inspire 2, coming in at $69.95. If you're checking your vitals regularly, you might just want to buy one of those.

Healthcare tech — Tech companies have increasingly become interested in the healthcare sector as their experience in advanced hardware and software-based algorithms can translate into applications like the one Google is introducing today. By collecting data from many users, the company can train machine vision technology to recognize how fast a person is breathing or the speed of their heart.

Google last month completed its $2.1 billion acquisition of wearables company Fitbit. The combined companies could share their respective expertise in hardware and software to create products for healthcare providers, which spend heavily on preventative tools for patients to monitor their health and identify problems before they become serious. Fitbit already partners with some healthcare providers to offer free wearables to patients. Apple similarly has deals to provide subsidized Apple Watches to patients who measure their health and commit to pursuing certain fitness goals.