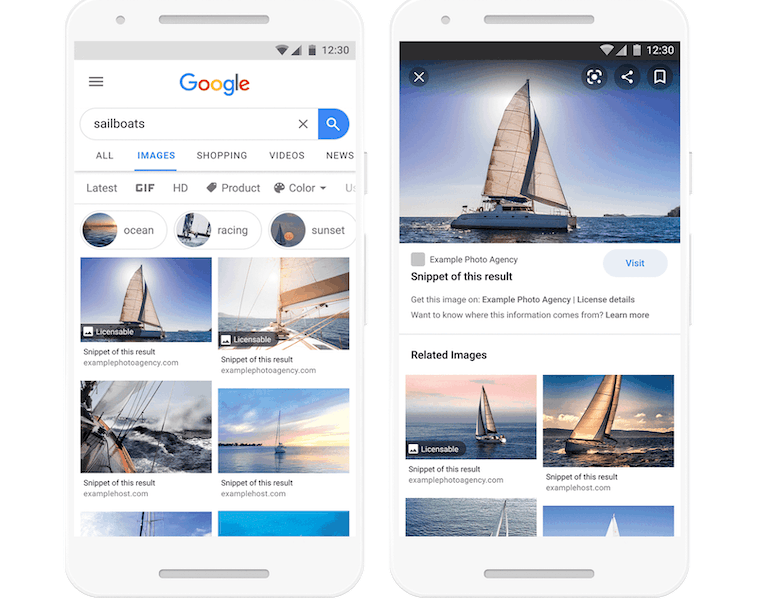 On Monday, Google announced that it will start including licensing information in image search results. The update will make it easier to track copyright, filter for commercial images, and help kick more business to photo agencies. It currently only takes one purchase for licensed photos to become easily accessible on the internet because reprobates share them as though they're public property. As a result, agencies and stock photo companies like Shutterstock and Getty Images (as well as the photographers and artists who work with them), miss out on paydays.

What’s new — For more than a decade, Google Image Search has allowed users to filter for images available under Creative Commons licenses. Now, there’s an additional filter for “commercial & other licenses.” If the image licensor provides the relevant metadata, these images will include a “Licensable” badge. If purchase details are provided to Google, image close-ups will also point users to where they can acquire the image.

“Google Images’ new features help both image creators and image consumers by bringing visibility to how creators' content can be licensed properly,” Paul Brennan, Shutterstock’s vice president of content operations, said in a statement. “We are pleased to have worked closely with Google on this feature, by advocating for protections that result in fair compensation for our global community of over 1 million contributors.”

Pay to play — Even when images appear outside of a licensors’ paywall, like in an article or portfolio, the images can still be purchased through an additional link. If these users don’t remove the metadata, the licensing and creator information would also surface in the image’s new home.

“We live in a dynamic and changing media landscape where imagery is an integral component of online storytelling and communication for more and more people, said Getty Images and iStock’s senior vice president of content Ken Mainardis. “We are hopeful Google’s approach will bring more visibility to the intrinsic value of licensed images and the rights required to use them.

Befriending the art kids — Google has been trying to make nice with creators lately — a solid optics move for a company that has such a powerful influence over the dissemination of online media. This image creator-friendly update follows a recent decision to pay for some news publishers’ content and joins its relentless Digital Millennium Copyright Act (DMCA) takedown infrastructure.