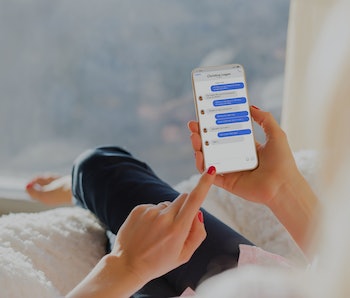 The great divide between green texts and blue texts may soon become a little smaller. On iMessages, users are able to send reaction texts to anyone, even those who aren't using iPhones. This is done using "fallback" texts, which are descriptive texts in lieu of the reactive graphic. Android users, however, can't do the same thing. But that may soon change, judging by findings from 9to5Google.

Digging for clues — Lines of code within the Messages beta v5.8 suggest a similar feature is on the way, meaning Android users can hit iOS users with texts like "laughed at a photo." The feature can't actually be enabled yet, so there's no telling how soon it may hit. We could be talking weeks or months.

But this little bit of code is enough to rejoice:

All hail reaction texts — Reaction texts have been a godsend, and in an ideal world we would be able to send them to everyone. Not all text messages warrant a full-fledged response, but leaving someone on read can make you look like an asshole. A little thumbs up, exclamation point, or "ha ha" thus serves as an excellent placater. All of the sudden, you're no longer a monstrous texter.

The fallback text doesn't quite provide the same magic. It's a little clunky to receive a description instead of a fun little graphic. But, hey, that's the recipient's problem, not the sender's. If you've sent a reaction, you've done your job.