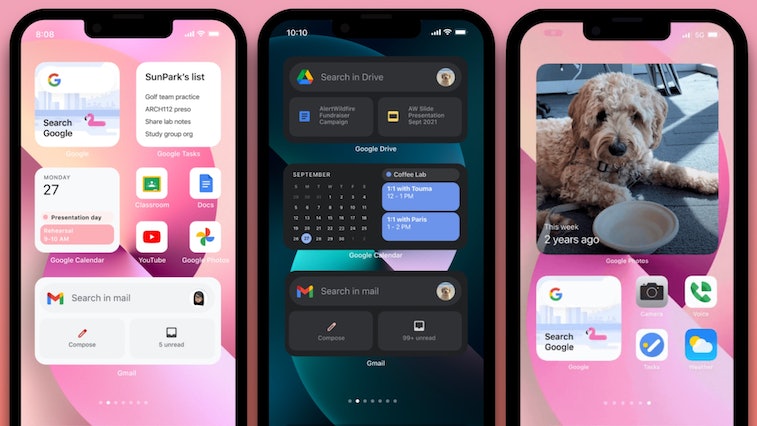 If you won’t switch to an Android smartphone, maybe you’ll at least Google-ify your iPhone. That’s what the company hopes to accomplish with a blog post titled, “Bring the best of Google to your iPhone.”

In it, Google’s director for the iOS platform shares screenshots of an iPhone 13 home screen bedazzled with Google apps, like Docs, and widgets like one for the Google Calendar. It basically looks like you’re using Android, but on your iPhone.

The post goes on to explain how users can use the “Smart Stacks” feature that was new to iOS 14 to stack different Google widgets on top of each other, allowing the OS to intelligently determine which one should be displayed at any time. And Google recommends switching from Safari to Chrome as the default browser.

You can set Chrome as your default browser, too.

Um, no — It’s quite confident of Google to think you’d want to blanket your iPhone in its apps. But then again, Google’s suite of services are popular. What would the iPhone be without YouTube, Google Search, or Maps? Much less useful, even if Apple doesn’t want to admit that it’s benefiting from a company antithetical to its principles.

Many people already have Google apps on their iOS home screens, though, and just aren’t completely embedded in its ecosystem, or don’t like its privacy standards. If someone loves Google that much as to cover their home screen in its apps, you’d think they’d get a Pixel. Maybe the premise of the post is that iMessage is the only thing keeping them from Google’s embrace.