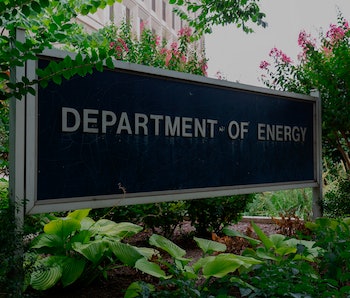 Along with a dozen other federal agencies, hackers are believed to have accessed networks belonging to the Department of Energy and the National Nuclear Security Administration, which oversees the U.S. nuclear weapons stockpile.

Vulnerable software — According to Politico, suspicious activity was recently identified in agency networks, but federal investigators don't yet know what exactly hackers might have been able to view. It's believed the networks were breached by compromising SolarWinds, a software company that sells IT software to government and private clients.

The FBI, Cybersecurity and Infrastructure Security Agency, and the Office of the Director of National Intelligence released a joint statement on Wednesday saying they were made aware in recent days of an "ongoing" cybersecurity campaign against the United States.

Besides the Energy Department, hackers were also able to breach the Federal Energy Regulatory Commission, which oversees the nation's bulk electrical grid. The agency doesn't directly manage power flows, so hackers wouldn't be able to attack the grid there. But the FERC does store data that could help identify the most disruptive locations for a future attack.

21st-century warfare — Breaches of critical U.S. infrastructure are a national security threat that experts have been warning about for years. As more of America's essential operations are connected to the internet, that leaves an opening for persistent adversaries like North Korea and Russia, who employ large cyber armies trained to find secrets and disrupt critical infrastructure around the world. With the right exploit, attackers can hit hospitals, banks, and other sensitive targets.

Cyberattacks are useful for North Korea and other foreign adversaries as they provide an edge that nuclear weapons don't. Hackers can conduct their work from other countries and make attribution hazy. Because North Korea's intranet is disconnected from the rest of the world in order to prevent citizens from seeing the world outside, retaliatory counterattacks are next to impossible.

The U.S. also conducts foreign espionage through cyber operations, but North Korea's have caused more damage. Officials in the Hermit Kingdom have described its cyber capabilities as, "an all-purpose sword that guarantees our capability to strike relentlessly." It's believed the country employs more than 7,000 specialized hackers. Besides the famous hack of Sony Pictures in 2014, North Korea has also used cyberattacks to steal cryptocurrency, a crucial source of funds that it can use to further its weapons program. The WannaCry ransomware attack that crippled hospitals around the world in 2017 was attributed to North Korea and contributed to the more than $2 billion the country has bagged from cyberattacks.

More like this
Andrew Paul
5.11.2022 5:11 PM
Snake on a Plane
Some jerk AirDropped plane crash pics to fellow passengers at takeoff
Annie Rauwerda
5.7.2022 3:30 PM
No hassle
Apple, Microsoft, and Google are teaming up to eliminate passwords
Ian Campbell
5.11.2022 9:30 PM
Google I/O 2022
Google adds 'Cliffs Notes' to Docs because who has time to read anymore?