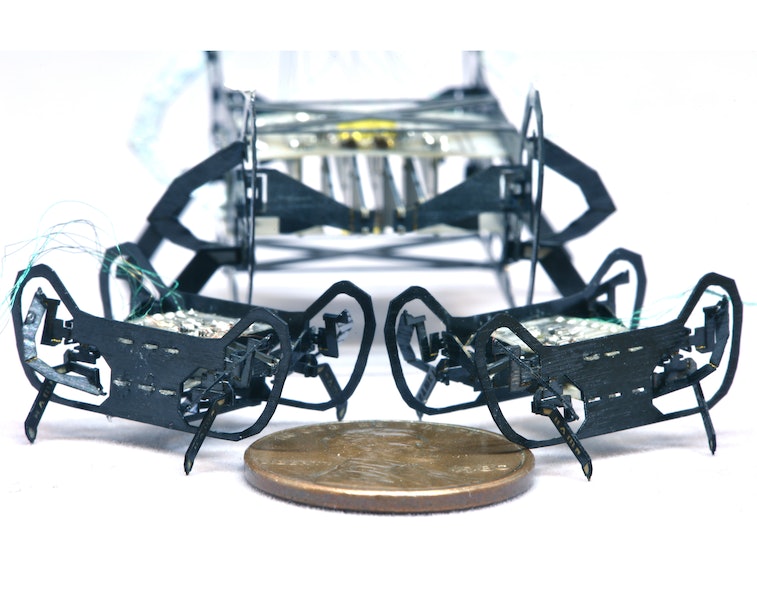 Harvard’s managed to make the second generation of its cockroach-inspired microrobot even smaller than its precursor. It's not around the size of a penny, Engadget reports, and it's not just small: It's dexterous and speedy, too. For researchers, it's no doubt a dream come true. For the rest of us who're still contended with the idea of murder hornets and a little on edge thanks to the back-to-back terrors 2020's offered us, the tiny bot are unsettling.

On Wednesday, the Harvard John A. Paulson School of Engineering and Applied Sciences (SEAS) announced it had halved the size of the Harvard Ambulatory Microrobot (HAMR). The new HAMR-JR was created with the Harvard Wyss Institute for Biologically Inspired Engineering and is just as complex as its predecessor. The new microrobot signals the ability to scale down other robots without significantly losing functionality.

Sizing up the HAMR-JR — The team of researchers behind this microrobot and the HAMR are focused on popout, origami-inspired robotics. In order to create HAMR-JR, they simply modified the 2D sheet design and other components. The SEAS and Wyss team also created a model to predict movement metrics like speed for various sizes, including payload capacity.

The HAMR-JR can scurry around at 13.9 body lengths a second, making it one of the fastest robots of its kind — though it has some issues slipping and connecting its feet with surfaces. Like the HAMR, this even tinier robot can also walk omnidirectionally, but it currently lacks underwater skills.

“This new robot demonstrates that we have a good grasp on the theoretical and practical aspects of scaling down complex robots using our folding-based assembly approach,” says paper coauthor Robert Wood, Charles River Professor of Engineering and Applied Sciences in SEAS and Core Faculty Member of the Wyss.

Small can be powerful — The ability to scale down some of the hulking robots that perform complicated tasks could have a dramatic effect on manufacturing processes and even commercial uses. Smaller, but just as nimble robots would be a boon for both assembly lines and whichever robot Amazon will inevitably put in your house.

Tiny robots could also prove useful in tight spaces, like searching through rubble after earthquakes or other natural disasters, or helping with maintenance checks on vehicles, machinery, or anything else that isn't roomy enough — or is too hazardous for — humans' hands to explore. First, the researchers are going to have to figure out how to power the critters without wires though. But you can bet they're working on it.