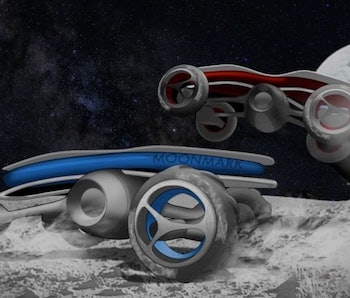 Moon Mark wants to send high schoolers to the moon... kind of. The project aims to have two competing teams of teens remotely control racers on the moon. The lucky youths will get to tweak the concept design, but the base comes from Frank Stephenson — the automotive designer behind many of the luxury cars you’ve lusted over in the past few decades. High schoolers around the world will compete for a chance to end up participating in the historic, late 2021 race.

The players — The Moon Mark project is made possible by partnerships with Intuitive Machines, Lunar Outpost, Frank Stephenson’s design firm, and SpaceX. Lunar Outpost's MAPP will be reconfigured for racing on the moon’s terrain in collaboration with Stephenson. The racers will hitch a ride to the moon in Intuitive Machines’ Nova-C Lunar Lander aboard a SpaceX Falcon 9.

The Nova-C will survey terrain to help Hermann Tilke, current designer of Formula One tracks, chart a lunar race circuit. Designer Stephenson is known for his work with Mini, Ferrari, Maserati, and most recently, the McLaren P1. He has developed a concept for the racers and will have the final say on their design, but the competing teams will be able to add their own flair.

“You want the surfacing to work with the engineering, not just add pieces on to make it look cool,” Stephenson told New Atlas after bemoaning the aesthetic design of lunar rovers. “Smart engineering and smart design should go hand in hand, so the ambition is to make it look great and work well.”

For the kids — As much as the space camp alums out there may be champing at the bit about this news, Moon Mark is aimed at getting kids excited about space again. High schoolers will go through eight weeks of challenges to determine the top six teams. The five-person teams will then compete to be the final two teams. Finalists will tweak the racecar designs in Houston, Texas, where Intuitive Machines is based, before their cars are shot into space.

Lunar communication with Earth is still bound by the limitations of the speed of light, resulting in 2.6-second latency. Not bad for the distance, but a lag still cringe-worthy to even casual gamers. The Nova-C is expected to act as a repeater, connecting to the vehicles over Wi-Fi and allowing near real-time communication with the teams on Earth.

Here’s hoping the thrill of racing on the moon outweighs an inability to make a “sudden” turn for the lucky finalists. Details aside, this project shows an increased interest from the private and public sectors in inspiring a new generation to explore the mysteries of space.