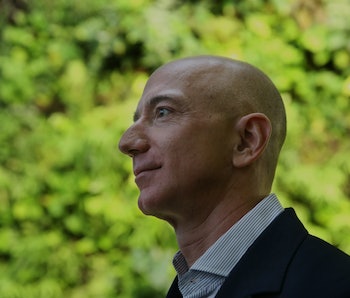 During his time in office, President Trump frequently swiped at Amazon and Bezos, the criticisms likely stemming from his ownership of The Washington Post. Trump repeatedly claimed without evidence that Bezos funneled Amazon’s profits through the Post to save money, seemingly by reporting it as losses. He also said that Amazon wasn’t paying enough to the United States Postal Service to deliver its packages even though the company contributes billions.

Later when explicit pictures of Bezos leaked to the media, it came out that the incident may have been politically motivated.

Amazon last year lost a lucrative Pentagon contract to Microsoft, and has argued that Trump’s attacks on Amazon are to blame. It’s currently fighting to overturn the decision and get a second chance.

Echo development — Bezos was very hands-on during the development of the Alexa smart assistant. Stone told Recode Media in a recent review that Bezos at one point got so frustrated with the assistant’s lack of comprehension that he told Alexa to “go shoot yourself in the head.”

Artificial intelligence-based programs like Alexa face a paradox in that they get smarter with more data, but without users they aren’t getting data.

Amazon apparently addressed this problem by placing disguised Echo devices in apartments and then hiring actors to walk through the rooms while reading aloud from scripts. The conversations were captured by an Echo, which would then send recordings and transcripts for contractors to annotate and correct for errors. Once Alexa reached a certain threshold of comprehension, Amazon released Echo speakers to millions of households and leapfrogged other companies like Google and Apple there were also working on AI-based smart assistants.

Despite beating them to the punch, people aren’t using their Echo speakers to order goods from Amazon like the company might have hoped. It did introduce an ad-supported music service for Echo owners, however, which may be responsible for growth in its Music Unlimited service.