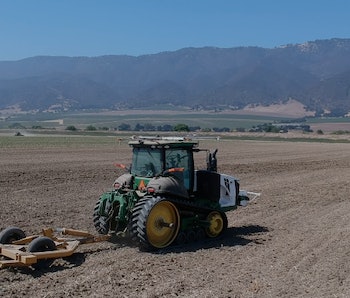 Labor is a big challenge in farming today, as younger generations simply don’t want to do the grueling work, and jobs in warehouses and other industries often offer better pay.

“One of the biggest challenges farmers face today is the availability of skilled labor to execute time-sensitive operations that impact farming outcomes. Autonomy offers a safe and productive alternative to address that challenge head on,” co-founder and CEO Igino Cafiero, said in a release.

Robots don’t sleep — Bear Flag retrofits existing tractors with its AI-based technology, which can be used for a variety of uses like tillage (digging up soil to prepare for growing crops). The technology uses a series of cameras and machine learning to automatically generate paths in a field and avoid obstacles like waterways, though a farmer can watch a video feed and take over remotely if something goes awry.

Farm work is one area where automation makes most sense. Whereas a person might not want to be waking up 4 a.m. everyday to care for crops — farming is a job that can’t wait, as harvest season is short — a robot will work whenever it’s needed. Robots can also potentially reduce the cost of food for consumers.

Future farming — Bear Flag has only deployed its technology to a “limited” number of U.S. sites thus far. Under John Deere it will no doubt get a big boost of support to expand further. That company’s tractors have become increasingly sophisticated in recent years and the purchase of Bear Flag makes clear it’s serious about being the leader in automated machinery as it starts coming to market.

Another company called Monarch already sells an electric tractor that can drive itself, but it’s a small vehicle and its battery needs to be charged after roughly ten hours of use. Bear Flag simply retrofits existing, diesel-powered tractors so that farmers don’t need to buy a new fleet.

As John-Deere vehicles have started incorporated more computing, some farmers have complained about its proprietary software, which makes it difficult to conduct repairs without an authorized technician. Owner-operators feel once they buy a tractor they should be able to do with it whatever they please, but John-Deere uses licensing agreements to alter the functionality of an owner’s vehicle at purchase based on what they can pay; allowing them to tinker with their own tractor would negate that possibility.