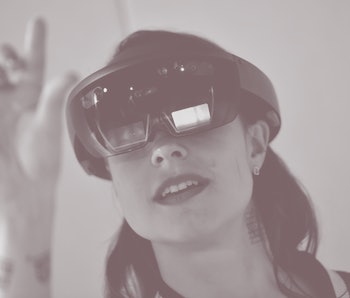 Microsoft says it recently made a major breakthrough with incorporating augmented reality into moving environments. The tech giant worked with Volkswagen to figure out how to adapt its HoloLens 2 augmented reality glasses for use in vehicles.

While HoloLens 2 does a pretty good job in stable environments, motion tends to muck things up. Similar to motion-sickness, the mixed-reality headset could sense it was moving in a car but also in a static environment. Microsoft and Volkswagen have solved this issue with the new “moving platform” mode for the HoloLens 2.

Full of features — Microsoft said it rolled out the moving platform mode a few months ago, but is only now showing off some of the ways it can improve driving. In some images, the HoloLens 2 was able to display a 3D map onto the dashboard along with a directional arrow onto the windshield.

Microsoft also showed off some safety features where the headset would display holograms when approaching a pedestrian crosswalk. The integration even lets you adjust the car temperature and the intensity of the air flow using gesture controls.

This mode could potentially lead to swifter adoption of augmented reality in vehicles, since all it requires is a compatible HoloLens or other AR headset. There are a handful of companies who have already embraced augmented reality on their own; for example, BMW iX’ infotainment system gives you a live stream of what’s in front of you, but augments it with directional arrows and guides similar to the driving line you’d see in video games.

Commercial, then consumer — The moving platform feature has already gotten the attention from maritime companies, who Microsoft says are interested in using it to help its workers at sea remotely connect to mechanical experts for more precise troubleshooting. It’s certainly good news for Microsoft’s HoloLens efforts, since there was some uncertainty about a successor following a report in February.

Microsoft and Volkswagen want to get this feature into consumer hands. Andro Kleen, head of the data science team at Volkswagen Group Innovation, said in a Microsoft blog post that there’s a world where people use smart glasses as soon as they leave their home and receive information from them throughout the day. We’ll just have to wait and see about that.