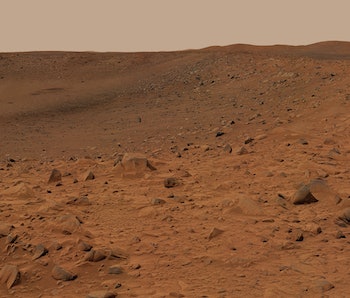 Sometimes the most enlightening experiments also happen to be the simplest. Conceptually, at least. A small array of instruments headed to Mars — in addition to one already there — holds the potential to vastly improve our understanding of the red planet and its place in our solar system, and put Einstein's theory of general relativity to new tests. The premise? Shine a laser at the target device on Mars and track the path by which it reflects.

The system works "a lot like a bike reflector," NASA explained in a Mars mission update this week, relying on devices known as retroreflectors to bounce a beam of light back to its origin. There’s one such instrument on the Perseverance rover, which is currently en route and set to touch down on Mars in February 2021. It’ll be the second retroreflector on the Martian surface following the arrival of one aboard the InSight lander that touched down in 2018. And one more will soon be on the way, carried by the European Space Agency’s (ESA) ExoMars rover in 2022.

Endless possibilities — That makes for an unprecedented chance to study the ins and outs of Mars, including the influence of the sun’s gravitational pull on the planet’s orbit and shape, the movement of its crust, and even the composition of its interior. We haven’t seen the start of experiments like this since Apollo 11 astronauts Neil Amstrong and Buzz Aldrin placed the first retroreflector array on the moon in 1969 — and scientists today are still learning from it.

"Laser retroreflectors are shiny, pointlike position markers," project leader Simone Dell'Agnello, of Italy's National Institute for Nuclear Physics, said in a statement. “Because they’re simple and maintenance-free, they can work for decades.”

Looking toward the future — A Mars laser isn’t yet a reality, but the placement of upcoming retroreflectors and that aboard Perseverance ensures that once it is, all the tools needed to work with it will be ready and waiting at the surface. While the Apollo-era retroreflectors reflected laser beams to and from Earth, the Mars arrays will be bouncing the light back to an orbiter. This future laser-equipped orbiter would emit light toward the Martian surface and receive its return.

Such a system would allow scientists to track the position of the Perseverence rover by what’s known as laser-ranging as it explores Mars, and more precisely pinpoint the subtle “wobbles” of the stationary InSight lander to assess crust expansion or contraction. It could also improve the accuracy of navigation systems to make future landings less hazardous. "Mars landings are hard," as NASA notes, and the ability to precisely target an ideal landing spot is crucial. And that’s only the beginning.

According to Dell'Agnello, "Laser ranging could open up new kinds of Mars exploration."