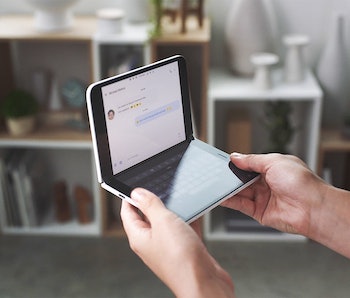 Foldable touchscreen devices are one of the most exciting and frustrating new frontiers in mobile tech. Microsoft is banking on that craze with its new Surface Duo, which was first announced in October but has yet to be used by the public. But a recent video shows the device out and about for a day on the town — the first real taste we’ve gotten for what to expect from the Duo.

Not all that many details — The video is more of a novelty than anything else. It begins with a few snapshots of the device fully open with two apps side-by-side, and then some footage of it being used closed with a single screen. The Duo’s hardware looks just as slick as Microsoft purported it to be.

Still a little buggy — Most notably, there are a few moments where the UI seems to struggle a bit. The screen takes a few seconds to switch from landscape to portrait mode, and then it fails to pull down a menu until the user swipes down a few times. This isn’t surprising, given that the Surface Duo isn’t due out until the end of 2020.

Two distinct screens could be the winner — One of the biggest failures of foldable touch-screen devices thus far has been their lack of stability — and this is often because creators are attempting to make one long screen that’s able to fold over itself. Both Motorola’s new Razr and last year’s Samsung Galaxy Fold suffered from this problem. But the Surface Duo takes a fresh approach: two separate touch screens connected by a thin, sturdy hinge. That could be the deciding factor in the device’s hardware stability. As for how the device works overall, we’ll have to wait for more hands-on previews to make that call.