OnePlus teases fitness band. Leakers reveal everything about it. 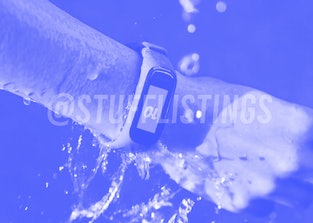 The number of days the wearable will reportedly last on one charge.

OnePlus wasted no time ringing in 2021 with a new teaser for a fitness tracker (not to be confused with the smartwatch that CEO Pete Lau confirmed to Input). But just as quickly as a teaser image was posted to Facebook directing to a pre-launch page, well-sourced leakers dumped images and specs of the unreleased wearble onto Twitter.

The lowdown — Leaker Ishan Agarwal, who's got a solid track record with gadget leaks, said the "OnePlus Band" is coming exclusively to India on January 11. Specs include a 24/7 heart rate sensor and SpO2 blood saturation monitoring, sleep tracking, a 1.1-inch AMOLED touchscreen, 14-day battery life, IP68 water resistance, and 13 exercise modes, according to Agarwal. He also claims the fitness band will cost INR ₹2,499 (about $34 USD).

Meanwhile, leaker Mukul Sharma has shared several images of the alleged OnePlus Band leaving virtually nothing left to the imagination.

A Mi Band in new clothes? — The similarities between the OnePlus Band and Xiaomi's Mi Band 5 are damn similar (no sick Neon Genesis Evangelion watch faces though). Everything from the display size to the battery life is identical. Even the affordable pricing is about the same.

OnePlus has worked for years to become not only a top phone brand in India, but a top electronics brand. Some products like the OnePlus TV launched exclusively in the second most populated country in the world and have yet to be released elsewhere. The company may be seeking to repeat a similar strategy with the OnePlus Band.

With the Apple Watch and Fitbits dominating in North America and Europe, it would be much harder for OnePlus to wiggle its way in. But then again, $35 and 14-day battery life would be tempting selling points for our pandemic reality.

Going budget everything — The OnePlus Band is yet another move by the Chinese brand to move beyond "flagship killers." Last year, OnePlus dipped its toes back into the mid-range arena with the OnePlus Nord. It also launched the $80 OnePlus Buds and $50 OnePlus Buds Z. And it's already announced more budget Nord phones in the form of the N10 5G and N100 5G coming to to the U.S. soon.

Some might see these releases as OnePlus coming full circle and returning to its affordability roots. But if you've followed the company since the beginning like I have, you'll see that things are different this time. In the beginning, OnePlus created premium devices and specs and sold them at budget prices. This new crop is a tier down — more like mid-range/budget design and specs at budget prices. This marked change in direction for OnePlus is maybe one reason why Carl Pei decided to leave the company he co-founded.