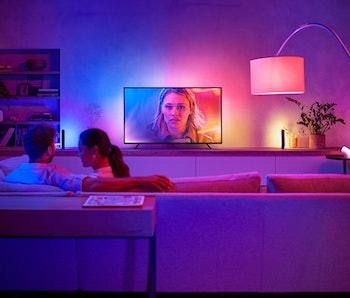 Philips is releasing an updated lineup of Hue smart lights, including a lightstrip meant to be mounted on the back of a TV. And yes, it can produce multiple light colors at the same time — a feature long missing from the existing Hue strips. The new Philips Hue Play Gradient, which is set to go on sale this fall, will come in three different sizes to fit your TV.

When it comes to smart light setups, Philips has separated itself from an overcrowded market by creating a lineup of easy-to-use lights with an attractive and intuitive user interface. The Play Gradient will be a welcome addition to the company’s smart lights line — but it’s not going to be cheap to bring it into your living room.

All about customization — The Play Gradient is a lightstrip made with customization in mind. It’s comprised of individually addressable LEDs, which means each can be programmed to each emit a different, well, hue. The strip can also glow and change along with whatever’s playing on TV — mood-matching to the extreme. That's a feature Philips offers in its own Ambilight TVs, but this will enable users to add the feature to a TV they already own.

The lightstrip will also come in three sizes to match up with common TV dimensions. Those sizes only range from 55-inch models to 75-inch models, though, so if your television is smaller or larger than that you’ll have to make do with a less-than-perfect fit. Although, if you're willing to drop hundreds of dollars on an LED strip, you probably have a large TV anyway.

But it’s going to cost you — If there’s any caveat to the wonders promised by the Play Gradient lightstrip, it’s that you can’t just plug it into an outlet and start up your mood lighting with a few clicks.

As with most of Philips’ Hue products, the new lightstrip will only be able to communicate with your home Wi-Fi network through the $60 Philips Hue Bridge. If you want to then use the strip with your TV, you’ll also need to buy a $230 Philips Hue Play HDMI Sync Box.

The lightstrip itself will cost between $200 and $240 depending upon the size of your TV. All told that means folks just getting their Hue setup started will need to put down around $500 to achieve full functionality on the new gradient lightstrip. But those who are already invested in the Hue ecosystem won't have to endure such a large hit to the wallet.

Along with the Play Gradient, Philips has also announced a redesigned Hue Iris, the company’s indirect lighting solution. The company is also releasing two new large-format filament bulbs and an updated E12 candelabra bulb for small light fixtures. If the Play Gradient is just what you've been waiting for you can pre-order it on Philips website right now.