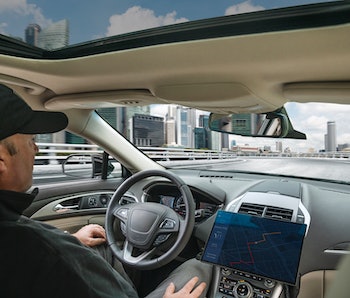 The platform includes hardware and software (that's right, full-stack baby), and will be available to carmakers later this year, with the first vehicles using it expected to arrive on roads in 2023.

Already lots of car partners –– Currently, 19 carmakers use Qualcomm's Snapdragon Automotive Infotainment Platform for telematics and infotainment, so it's got plenty of ins. The chipmaker has also expanded the scope of its partnerships with GM and Jaguar Land Rover, so we wouldn't be at all surprised to see its Ride Platform show up in those brands first.

Car-to-cloud services –– Qualcomm's also expanding its connectivity and telematics services with its new Car-to-Cloud services. The company says it promises the sort of upgradeability usually found in smartphones, so carmakers will be able to do over-the-air software updates to supported vehicles –– you know, like Tesla does already.

Plenty of growth from auto –– Qualcomm reports its 2019 revenues for auto exceeded $600M, and the company expects that to leap to around $1.5 billion by 2024. We're just hoping that means we'll see genuine autonomous driving by then –– our to-watch list on Netflix isn't getting any shorter.